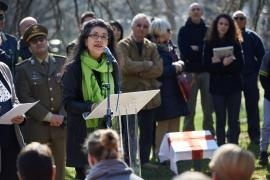 Ho Manli at the Garden of the Righteous of Milan

Here we propose the speech of Ho Manli, daughter of the Consul Ho Feng Shan, pronounced in honour of his father at the ceremony at the Garden of the Righteous in Milan on March 14, 2018. The diplomat who engaged in the rescue of the Jews, providing them Chinese passports for escaping from deportations, has been celebrated on this occasion with the title of Righteous in the Garden of Milan Monte Stella.

Greetings! It is a privilege for me to accept on behalf of my late father, Dr. Ho Feng Shan, this prestigious recognition by the Association for the Garden of the Righteous in Milan. Grazie mille per questo onore!

It is most fitting that this commemoration is being held this year, as it is also the 80th anniversary of the beginning of diplomatic rescue efforts of Jews from the Shoah.

My father was the first foreign diplomat to do so, exactly one month after the severe escalation of Nazi terror and persecution of Jews following the Anschluss, or union of Austria and Nazi Germany in March 1938. My father, in his capacity as the Chinese Consul General in Vienna, began issuing thousands of Shanghai end destination visas to Jews to enable them to escape certain death at the hands of the Nazis. In doing so, he put the city of Shanghai on the map for Jewish refugees as a refuge of last resort.

My father had defied the orders of his superiors and harassment by Nazi authorities to follow his conscience. During his lifetime, he neither sought nor received recognition for his lifesaving deeds. In fact, he rarely spoke about his tenure in Vienna. He was never reunited with any of those that he had helped. Most of them never even knew his name.

It was only after his death in 1997 that by sheer chance, I began to research and document his humanitarian efforts and to bring them to light. In the year 2000, my father was recognized as a Righteous Among the Nations for his “humanitarian courage” by Yad Vashem.

My father would have been astonished by the honors that have since been accorded him. To him, the reason for doing what he did was simply this, he said: “On seeing the tragic plight of the Jews, it is natural to feel deep compassion, and from the standpoint of humanity, to be impelled to help them". (“看到犹太人的厄运，深感同情是很自然的，从人到方面，帮助他们也是应当的.”)

Today, in this ceremony with the theme of “The Righteous of Hospitality. Beyond the boundaries to pull down the walls”, my father has joined a unique pantheon of humanitarians from both the past and the present, who are being honored for their ability to transcend their diverse backgrounds and cultures to realize a potential that we all possess, which is to fully exercise our humanity.

They leave us a legacy which serves not only as a lesson in times of inhumanity and moral chaos, but also provides us with hope and with comfort. I would like to borrow a midrash – or rabbinical commentary of the ancient Hebrew texts - which best expresses that hope and that comfort.

Before the sun of a righteous person sets,

God causes the sun of another righteous person to rise.”