Recognition of the Armenian genocide 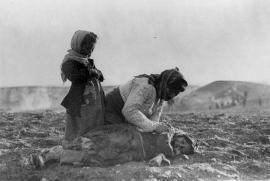 On 10th April 2019 the Italian Chamber of Deputies approved, with 382 votes in favour and 43 abstentions (no votes against), the “unitary motion committing the government to officially recognize the genocide and give it international resonance”.

Before “recognition” comes “knowledge”. Only after knowing the identity of a people, the weight it has had in history, the values of which it is the bearer, one can make a commitment to fight against denialism, which can be defined as “what rejects historical truth”. When it comes to Armenia, the foundations of official denialist historiography of the Turkish Republic were laid by Mustafa Kemal, known as Atatürk, the homeland father. The founder of the Turkish Republic initially condemned the work of Young Turks, calling them murderers and thieves, but when officers, governors, soldiers, gendarmes and the entire bureaucracy of genocide merged into the republican party he organized to build future Turkey, he changed his attitude. Four of the main executioners became his ministers and Mustafa Kemal completed the ethnic cleansing of Armenians throughout the country: out of the 3 decrees issued by the previous unionist government (reforms, deportation and confiscation of Armenian assets), he kept the act of confiscation of abandoned property. Passports of the few Armenians survived, then “expelled”, read: pas possible le retour (it is not possible to come back). In a famous political speech held in 1927, Mustafa Kemal highlighted the country's ability to be reborn and to be strengthened by war, as it had been able to resist the attacks of “immoral minorities”, namely the Armenian minority that had settled on the territory for three thousand years and that was thus separated and expelled from the history of the Ottoman Empire. How could Turks, after the end of World War I, refute “heroes” who had given birth to the monoethnic republic, exterminating Armenians and seizing all their assets?

When wondering about the causes that prevented Armenians from having justice and burying their dead, a comparison may be useful with Germany after the Second World War. The German army was dissolved, the Nazis outlawed, victorious nations had justice. If the Nazis were in power in Germany today, who could claim that the Holocaust, the genocide of the Jews, took place?

After the end of World War I, Westerners did not want to disarm the Turkish army, which became the backbone of the nation and statues to the executioners, the “heroes”, were erected throughout Turkey: continuity, against discontinuity. If it had recognized the intentional and systematic extermination of Armenians by the government of Young Turks, or the “genocide”, Turkey could have been one of European Community nations. Such recognition would have allowed it to appear among democratic states.

Entire eras and events have been erased from the history and memory of Turks until today. But when one considers that this is the “crime of crimes” of which the Armenian people were victims in the early twentieth century, that is to say the crime of “genocide” - condemned in 1946 by the UN General Assembly and defined as “denial of the right of existence of an entire human group that shocks the conscience of mankind” -, the extent of the commitment required to undertake a path involving international law and politics in its highest meaning is quite clear. Remembering and condemning the crime committed by those who have legislated against their citizens is a universal message, which applies to all mankind, yesterday and today.

The approval of the motion on recognition of the Armenian genocide voted by the Chamber of Deputies of the Italian Parliament is important because it opens another “door” to the possibility for Turkish or Turkified people to change their mind and become aware of what happened. And it is precisely the Turkish civil society that can be expected to push for change: let people think, know, “acknowledge” in the future, to prevent and give new generations the opportunity to deal with History openly and critically, and perhaps to see new statues celebrating disobedients, the Righteous who were able to say no.

Translation from Italian by Valentina Gianoli

Analysis by Pietro Kuciukian, Honorary Consul of Armenia in Italy and Co-Founder of Gariwo