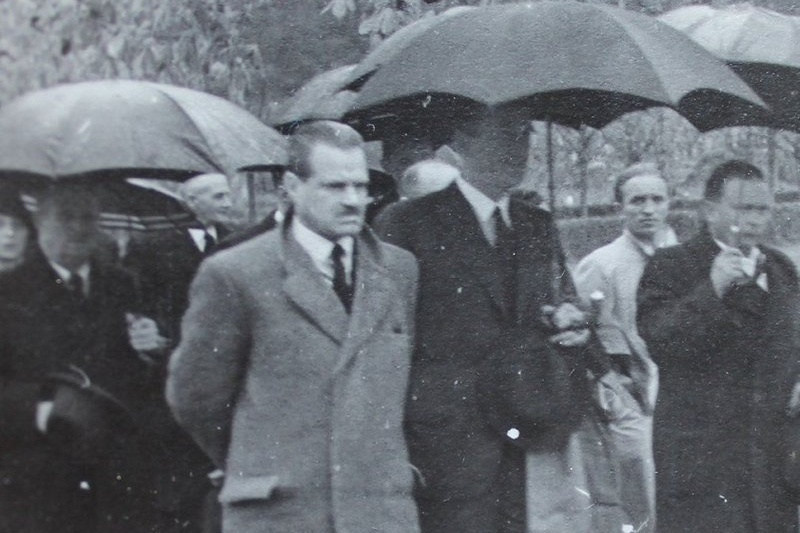 Polish diplomats made a daring attempt to save thousands of Jews. As a result, at least several hundred people were saved from death.

After the fall of Poland at the start of World War II, some Polish diplomatic offices in other countries remained open. In Bern, Switzerland, ambassador Aleksander Ładoś and his two principal aides, Stefan Ryniewicz and Konstanty Rokicki, undertook a major rescue effort of Polish Jews. It began when dozens of Paraguayan documents were obtained from Rudolf Hügli, the Paraguayan consul in Bern, in which the names of Polish Jews were entered and properly sealed as supposedly Paraguayan nationals, which enabled some of them, living in Polish lands under Soviet occupation, to escape to Japan. There, the Polish legation issued them proper Polish passports with which they proceeded to other destinations.

This led to a greater effort of help to Jews (mostly those in Poland, but also in other German-occupied countries) to avoid deportation to the death camps, by issuing them false Latin American, but mostly Paraguayan, passports. Such passport holders were kept by the Germans in special camps under the policy of hostage exchange which the Nazi regime hoped to accomplish with Germans living in various Latin American countries, for their return to Germany. This work, initiated by the Polish legation, was coordinated with two main Jewish rescue activists, both stationed in Switzerland—Abraham Silberschein, head of a subsidiary of the World Jewish Congress dealing with rescue, and Rabbi Chaim Israel Eiss, of the Orthodox Agudat Israel movement. It was also coordinated with Yitzhak and Recha Sternbuch, who represented the New York-based rescue committee, known as Vaad Hatzalah. Julius Kühl, the Jewish employee in the Polish legation, also played a significant role in this false passports scheme.

The conversion of Polish citizens into Paraguayan ones was done secretly, without the knowledge of the Paraguayan government. It was also done without prior approval of the Polish government-in-exile in London, although the government consented when it learned of the initiative Ładoś had taken, that risked complicating relations between Poland and the Latin American countries.

In his statement before the Swiss police, Silberschein emphasized that his work was done “in full cooperation with the Polish diplomatic authorities in Switzerland.” Kühl, too, under investigation by the Swiss police, stated that the passports operation “was fully carried out with the knowledge of our envoy, Herr Minister Alexander Ładoś.”

When Ładoś learned that the Germans were questioning the validity of the passports held by (mostly) Polish Jews temporarily held in the Vittel camp, in occupied France, he dispatched (on Dec. 19, 1943) an urgent message to Tadeusz Romer, the Polish foreign minister, in London, pleading for intervention with the Latin American legations in Berlin to recognize these passports, since they were “issued solely for humanitarian purposes in order to save people from certain death. ... The matter is very urgent.” Ładoś followed this up with additional pleas in the next months, including to the head of the International Red Cross, in Geneva.

Another important mechanism through which the Polish legation in Bern was of immense help to Jews was the use of its special radio station to transmit secret messages on the situation of Jews in German-occupied countries. This, too, was in violation of the Swiss policy of neutrality. Isaac Lewin, of Agudat Israel, who was the recipient of these messages via the Polish consulate in New York, stated after the war that Ładoś merited to be inscribed “in gold letters in the book which records for posterity the attempts at helping the unfortunate victims of Nazism.”

On Jan. 21, 1944, H.A. Goodman, head of Agudat Israel in London, wrote to K. Kraczkiewicz, of the Polish Foreign Office, of “the most helpful attitude adopted by our Minister in Berne, Dr. Ładoś”; that “without his assistance, many of the activities which we have undertaken could not have been fulfilled.” Kühl, in his post-war memoirs, praised Ładoś as “a real Righteous Among the Nations,” and “a real humanitarian.” That he did his utmost to be of service, by “using all his influence in the Swiss diplomatic service as well as with the Polish government- in-exile.”

On Oct. 13, 1943, Swiss Foreign Minister Marcel Pilet-Golaz summoned Ładoś to explain the passports scheme. As recorded by the Swiss foreign minister, “I point out to him [that] we found that members of the embassy and consular staff had conducted activity that was beyond the scope of their competence and duties. ... That is why we intervened.” To this, Ładoś responded in anger that his government would not accept the Swiss protest, since it was strictly a humanitarian action. Also, there was no intention on the part of the holders of the false passports to head to these countries—the intention was simply to avoid being deported to the death camps.

There are no exact figures regarding how many Jews benefited from the Latin American passports scheme but, by all accounts, the figure runs into the thousands. In a major study, Jakub Kumoch, the former Polish ambassador in Switzerland, has so far identified 3,262 names, of which an estimated 796 survived. However, when one takes into account that family members were also included in many of the passports, the total beneficiary figure may run much higher, perhaps as many as 8,000, of which between 2,000 to 3,000 may have survived. Work on this tabulation is still continuing.

Polish diplomats Ładoś, Ryniewicz and Rokicki risked being expelled from Switzerland and the Polish legation being closed. The record shows that the Swiss authorities seriously considered taking punitive measures, but stopped short due to the changing military situation in favor of the Allies, to which the Polish government-in-exile also belonged.

Yad Vashem in Jerusalem has so far awarded the title of Righteous Among the Nations to Konstanty Rokicki. Hopefully, Aleksander Ładoś (the man most responsible for this vast rescue operation) and Stefan Ryniewicz will soon also be added to this honor.

Text published in the monthly Wszystko Co Najważniejsze (Poland) as part of a historical education project with the Institute of National Remembrance and National Polish Bank.
Mordecai Paldiel is the former director at the Yad-Vashem Institute in Jerusalem. The unit he led between 1984 and 2007 awarded the title Righteous Among the Nations to tens of thousands of people around the world. He is the author of numerous books on the Shoah and a university lecturer in the United States. This article was previously published by the Jewish Journal.

Here the link to the publication on Jewish Journal.