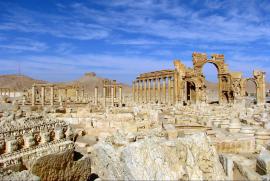 Palmyra before its destruction (courtesy of Maria Teresa Grassi)

Crossing the Syrian desert from Damascus to the Euphrates, nearly half way you find a big oasis – and this is normal in every desert of this world – and a great Roman city – and this is certainly less frequent. This town is Palmyra.

In ancient times you would enter the city through the Valley of Tombs, one of the most charming corners of this whole site. On the slopes of the mountains and at the bottom of the valley high quadrangular towers stood out against the blue sky. They were the big, two- or three-storey family tombs, where dozens deads were buried, each inside a cell sealed by a stele holding his or her portrait, name and kinship ties with the tomb’s founder.

The well-known portraits of the Palmyrenes offer todat, in all main world museums, an image of luxury and wealth: a rich, silent and calm community of men taking parts in banquets and wearing rich embroidered garments, and women with blazing jewels.

The wealth of the Palmyrenes came from trade first of all: from the 2nd and the 3rd century A.D. they nearly managed to hold the monopoly of the great trade of luxury goods that flew in from the Orient. After crossing the Persian Gulf, those precious commodities coming from China, India and the Arabic Peninsula, went up the river Euphrate, crossed the desert to Palmyra and continued their trip towards the Mediterranean coast, to then be embarked for Rome and the most important hubs of the whole Roman Empire. Palmyra was a required stop across this and other routes from Persia and Central Asia, and became an important “caravan city”.

The Palmyrenes organized and funded the trips, had men and warehouses along the routes, they were on good terms both with the other powers of the Mesopotamic area and with the desert’s marauders, granding absolute security and success to the caravans.

The wealth amassed by some Palmyrene clans must have been huge, given the very high mark-up they had on the trade of such commodities as high-value textiles (including Chinese silk), the precious stones, pearls and spices.

That was how they built their spectacular tombs, which also became a “business” for the Palmyrene clans: many epigraphs witness to the sale and rental of part of the burial cells, and often the firstborn son of the tomb’s founder was also its administrator: business is business.. and the Palmyrenes were true masters in this field.

They did not only enriched with monuments the city of the dead, though, but they transformed in such spectacular way also the city of the living, drawing inspiration from and modelling their buildings after the great metropoles of the Roman Orient, first of all Antioch, the capital of the Syrian province.

The backbone of ancient Palmyra was the Great Columned Way, a majestic, longer than a kilometre road sided with columned porticoes that crossed the town from the West, where the road from Damascus entered the city, to the East, at the Sanctuary of Bel.

All Palmyra’s columns have a peculiar feature: their upright thrust is interrupted by a protruding bracket, on which in ancient times stood a statue made of stone or, more likely, of bronze. It is difficult to imagine such a peculiar ancient urban landscape, with dozens of statues on the columns, often accompanied by inscriptions reminding of the names and the merits of the honoured personalities.

Palmyra’s columns are not only columns in the traditional sense of the word, but also – and chiefly – become a support for those honouring statues that, yes, were to be found everywhere in the Roman world, but only in Palmyra could boast such a spectacular position.

The grandiose temple of Bel was known by the Palmyrene as the “house of gods”, because Bel was not the only god to be worshipped in this holy place, and many other godnesses were venerated with him.

Until the recent tragic destruction, the temple and the wall of the sacred fence were extraordinarily well preserved, thanks to the steady maintenance that had been done to them over centuries. The temple had been turned into a Christian Church and then a mosque, and all around a village had been built where since the Middle Ages the inhabitants of the oasis had found shelter. In the Thirties, at the time of the French mandate on Syria, precisely the dismantlement of the village and the forced transfer of the population to a new and more modern city, created in the outskirts of the archaeological site, marked the beginning of its improvement.

The new city was called Tadmor, drawing on the more ancient name of Palmyra, known from documents of the 2nd millennium b.C..

The other well-preserved temple – that was also destroyed in those months – belonged to god Baalshamin. Built over time by the members of a powerful Palmyrene clan, it testifies the presence in Palmyra of another pantheon, whose apex is Balshaamin, “lord of the skies”.

The coexistence in the same city of Bel and Baalshahim (both translated as Zeus into Greek), besides many other godnesses that it would take long to list, is the best testimony of the melting-pot of ancient Palmyra. In the oasis there were a melting-pot and a coexistence of men, gods, cultures: for those who came in from the West, from the Mediterranean, from the Greek-Roman world, Palmyra would appear as a “very” oriental city, but for those who came from the East, the Mesopotamic area or Persia, Palmyra was already fully Western.

Its strongly original culture was ideally on the half way between East and West. The violence that is destroying Palmyra today, for those who are aware of its ancient role as a crossroad of cultures, is even more tragic.

As a matter of facts Palmyra has kept being a meeting point: the cultures that met in Palmyra until a few years ago expressed a plurality of voices. They were no more the voices of the ancient merchants, but those of the modern archaeologists; bargaining was replaced by a broad and stimulating scientific debate about a site that, ever since 1980, has been declared as belonging to the UNESCO World Heritage.

Work on the field was carried out by Syrian, Polish, French, German, Swiss, Austrian, Danish, Japanese and American scholars, to whom in 2007 an Italian mission was added, whose project was aimed at exploring a little known realm, the one of the private life of the ancient inhabitants of the oasis.

The extraordinary human, cultural, scientific experienced I lived in the four years I spent in Palmyra (2007-2010), which for other scholars had gone on for decades, was interrupted.

Also the life of the last lord of Palmyra, Khaled al-Asaad, committed for decades to the study, enhancement and preservation of the archaeological site, was destroyed.

We shall not forget his sacrifice, his testimony against the savagery that today could erase not only this site, but also a whole country and a people.