Netanyahu and Kagame: Their Hands Are Full of Blood 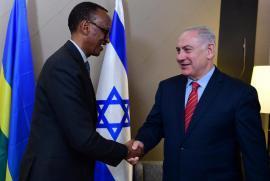 We propose the analysis of the Israeli historian and expert on Holocaust and genocide studies Yair Auron about the meeting - that took place the 24th January 2018 at the World Economic Forum in Davos - between the Israeli Prime Minister Benjamin Netanyahu and the Rwandan President Paul Kagame - the theme it is the deportation of refugees from Israel to Rwanda.

According to the media, the “summit meeting” between the Israeli Prime Minister and the President of Rwanda at Davos raised more interest than Netanyahu’s meetings with the German Chancellor, the French President, and even the President of the United States.

The two leaders are trying to ‘iron out the wrinkles’ and ‘close the deal’ that would allow for the continued deportation of refugees from Israel via Rwanda, at times to their death, at other times to hell on earth.

It seems inconceivable that this is done by two peoples who have experienced genocide in recent times – us in the 1940s (and the last Holocaust survivors are still among us), and the Tutsi in 1994. The quickest genocide in history was not stopped by the international community, but by Tutsi forces that came from outside the state, led, among others, by the incumbent Rwandan President. Around a million people – the actual number may never be known – were murdered in just a hundred days; that is, about 10,000 human beings per day, 416 per hour. That is, seven human beings just like me and you, were murdered every minute. And the world knew, and saw, and kept silent, turned its back and did nothing.

We, in Israel, saw and kept silent. We did send a mobile hospital to save lives, but at the same time, we also sent arms for killing, whilst the genocide went on, and did it knowingly and consciously. Even if we did not know the exact number of the massacred, we have watched hundreds of bodies floating down the river – on the two TV channels we had at the time. The weapons were sent by the Government of Israel to the murderous Hutu government, not by private arms dealers. And yes, the Israeli government at the time was sadly the Rabin-Peres-Meretz coalition.

The ‘leftist’ Supreme Court has repeatedly refused our request to expose documents that the state admits are in its possession, which prove unequivocally the crime committed according to both Israeli and international law. That crime is, in fact, complicity in the crime of genocide. Sending arms to Rwanda during the genocide is quite similar to sending arms to Nazi Germany during the Holocaust. These are difficult things to say, but they must be said.

The Rwandan President, an ethnic Tutsi and son of genocide survivors, knows this very well. But that did not prevent him from coming to Israel for the late President Shimon Peres’s 90th birthday celebrations; it has not prevented him from receiving Netanyahu at the Genocide Museum ini Kigali, keeping silent about Israel’s crimes during the genocide. His government ministers even tried to deny it ever happened, because the mention of those arms deals may jeopardize the current weapons deal hatched between the two governments, who are still trading heavily.

Senior Rwandan officials are denying any deal regarding the deportation of refugees, but and under careful analysis, official statements reveal contradictions, and it is safe to assume that many lies are being disseminated.

Two peoples who have experienced genocide, for whom genocide is possibly the most important component of their identity, are now sending refugees to their horrific fate. Such fate has been documented by extensive evidence and testimonies of survivors, who often say they’d rather die than choose that route.

It must be said: both governments are involved in human trafficking. There is no other definition for these dealings: the government of Israel pays a sum (perhaps $5,000 ‘per head’) for every refugee that Rwanda agrees to allow to pass through its borders. Both peoples must have learned a disastrous lesson: That there are human beings – members of your own group – who are worth more, and there are others, who are worth less, and then there are those who are worth nothing at all. There are no moral restrictions, and survivors are allowed anything, with impunity.

All this takes place in front of our eyes on the eve of the International Holocaust Remembrance Day (January 27). When I contemplate this, I know that evil, almost any evil, is still possible now. True, this is neither the Jewish Holocaust nor the Rwandan Genocide, but it is horrific enough, unthinkable enough, and so deeply disheartening …

And yet the mobilization in recent weeks of broad and diverse publics in Israeli society, who are currently awakening for protest, is an injection of hope that compels us to keep protesting until the deportation decree is aborted.