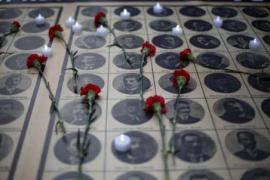 It is sad to be forced to come back once again to the topic of genocide denial. When the Chamber of deputies recently approved the decree that has been facing a long passage through the Chambers of the Italian Parliament, after the Senate had already passed a reviewed version of it, I felt all this demands a commentary. Which can be nothing but absolutely negative.

It seems almost as if the leading class had not even tried to harness the benefits coming from the discussions that have involved historians and jurists for ages. They apparently did not listen to the opinions and testimony of the history experts that had been invited to speak before the Justice Committee of the Senate, but instead they preferred to accept the pressure coming from the Jewish community and all the people who believe it is a moral duty to protest against the spreading of abhorrent and dangerous stances.
What the promoters of this law do not seem to understand is that precisely this law gives rise to a series of not negligible dangers, prompting the bench to step into the historical judgement over themes and issues that divide the very historians or jurists.

In facts, this law does not introduce a penalty (varying from 2 to 6 years, far more than in any other European country) only for those who deny the Holocaust – which is the matter in most European laws against negationism – but for anybody who bases his or her own racist incitement or propaganda messages “completely or partly on Holocaust denial or the denial of other genocide crimes, crimes against the humanity and war crimes”, as those crimes are defined by the statute of the International Criminal Law.

If our legislators had made any reference to the “verdicts” of the international (or maybe also national), courts, the denial of any genocide case or war crimes or crimes against the humanity would have been addressed clearly and properly, leaving suspended for a while the issues of freedom of expression and historical research and judgement, and the abhorrent habit of imposing state-sponsored truths that are mainly characteristics of totalitarian regimes. Without that reference, and referring instead to the “statute” of the International Crominal Court, those composite, complex articles indicating a great deal of criminal cases that today can be traced back to genocide or war crime or crime against the humanity, run the risk of being interpreted by any judge arbitrarily and beyond not only any historical logic, but also beyond any judicial logic. In the last verdicts of the international tribunals there have often been some minority judgements, bearing fitness to the fact that not even among those judges it is always easy to establish and agree on what was really a war crime or a genocide case, a crime against the humanity or a “simple” massacre.

Let us consider war crimes: according to the Statute’s definition, for how strange it may seem to a scholar in this field like me who is thug no jurist, but a historian instead, under the category of war crimes we ought to consider an really huge number of actions, from the shelling on the British or German or Japanese cities in WW2 to those of Vietnam and so on to include many other shellings or “collateral damage” against the civilians that occurred in Iraq and Afghanistan. We also know that many people – jurists, historians, journalists and common people – believe only some of these have been war crimes: will it depend on any judge, maybe unaware of history, to establish whether Hiroshima and Nagasaki were war crimes and hence this becomes an undeniable truth, if the same applies to the gas shellings against Ethiopia by the Italian army, or the Israeli bombings on Gaza or those og the Nato on Belgrade? This is the outcome of this law, although we can firmly believe that no judge provided with common sense will ever venture onto this slippery slope and he will limit himself, in some cases, to publishing Holocaust denial, immediately sparking rows on the failure to apply this law to all other cass of genocide, war crimes and crimes against the humanity.

Someone would have liked, actually, only the Holocaust to be the case in issue of the law, as happens in many European countries; although we should not forget about the denialist laws against the crimes of communism in some formerly communist countries or those relating to the Armenian genocide, in which it is never made clear if the target of criminal punishment is the denial of the use of the G-word or the denial of the occurred historical event, i.e. the massacres that annihilated over a 1,200,000 Armenians from 1915 to 1916.

If the MPs that have devoted such a long time and in such great numbers to the preparation of such an ambiguous, confused and arbitrary law, which was very widely criticized both by the jurists and by the historians, had done their best to understand what measures of the cultural, educational and social kinds would have best suited the purpose to limit the spreading of negationism above all among some juvenile groups, which positive experiences could have been done in schools or neighbourhoods, through radio and tv, probably the outcome would have been a very long list of potential for really containing negationism. By this criminal law, society (actually the politics that arrogate to itself the prerogative to interpret society) should feel reassured, because there is always jail ready for those who should happen to infringe the law, and should then feel entitled not to think any longer of the real strategies to counter negationism that wouldhave a better chance of being successful.

If any magistrate ever interpreted this law literally and decided to indict someone, we can be sure that the – judicial and mediatic – lawsuit would focus mainly on freedom of expression, thus managing to give negationists the opportunity to set themselves up to heralds of free thought, especially if the case dealt with crimes- which are fare more than we can imagine – upon whose definition there is no agreement even among experts and scholars.

In the case of negationism, even more than in many other cases, prevention should prevail on punishment: the choice of providing criminal prosecution, instead, implies the actual abandonment of any pre-emptive strategy in the field of education, culture, and socialization. And this is the worst damage that this law difficult to apply has introduced into our social life.

Analysis by Marcello Flores, historian and professor at the university of Siena