My dream at the Synagogue of Milan 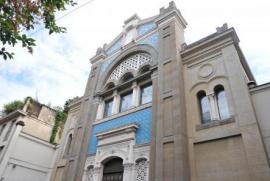 The Central Synagogue of Milan

I have always nurtured a small dream: seeing in such an important place for Jewish life and memory a sign of recognition for the suffering endured by other peoples and human beings. Also Avraham Burg, former president of the Knesset, who did so much for peace in the Middle East, nurtures the same dream. He imagines one day, the Yad Vashem Memorial in Israel can become a plural monument that remembers, beside the Holocaust, also the genocide cases befalling the other peoples. He writes so in his beautiful book Defeating Hitler. He would like his country, rooted in the memory of its suffering, to become one day a place of dialogue and meeting between all memories. He wishes, just like Yehuda Bauer – one of the greatest Holocaust scholars – that Israel were able to become the most important place of reflection on genocide prevention on earth.

But how did my dream come about? First of all because I consider myself as lucky for having been born in Italy after the war. Differently from previous generations, not only I have never experienced a gut anti-Semitism, but I have seen grow over all these years a great sympathy for the Jewish people. I have travelled all along Europe, but there is no other country like Italy that experiences Holocaust Memorial Day with the same passion and intensity.

Furthermore, as I descend from a family that in Greece witnessed to the death surrounded with indifference of one of the most beautiful Jewish communities of Europe, like the one of Salonika, I learnt ever since my childhood that what happened to the Jews shall not happen to any human being anymore. I learnt from the Jews’ fate that you can fight indifference through the exercise of putting yourself always in the other’s shoes. Those who have been to the camps, said David Rousset, a Buchenwald survivor, had to become “specialists” at fighting against all kinds of lagers.

However this is no easy dream. For a very long time, the Jews have had to struggle for recognition of their genocide. Primo Levi had a hard time to find in the aftermath of war a publisher for If this is a man, and in the communist countries, where most of Europe’s Jews lived, there was no public discourse about the victims killed for they were Jews, but about generic victims of capitalism. Only after 1989 a discussion about the Holocaust started. And still nowadays, a part from Tunisia and Morocco, in the Arab world the memory of the Holocaust is presented as a devise of Zionist propaganda.

This way, many Jews have deemed better to focus on their struggle for memory. As the world had been indifferent toward them, they had to teach everybody not to let themselves again be carried away by anti-Semitism. This was a duty of responsibility toward the victims of their people.

in this needing for recognition of one of the most heinous crimes of the whole history of humanity – as wrote Jan Karski, the unheeded Polish messenger who tried in vain to warn Eden and Roosevelt about the situation of Jews in Poland, and thus after the war he talked about a second original sin – and yet a short circuit occurred. The fear that such huge tragedy might be forgotten led many Jews to think that any comparison with other crimes could diminish its seriousness. Hence the defence the uniqueness of that genocide in particular has created many barriers, and prevented Holocaust remembrance from becoming a shared, plural memry for all genocide cases. Comparing, for some people, was very dangerous.

In life though, unexpected things happen. When Gadi Schoenheit came to tell me that within the Festival Jewish in the city the core event would be the positioning of a plaque in the Synagogue of via Guastalla in Milan, remembering all the Righteous in all genocide cases – and not only those who rescued the Jews – to tell the truth I did not quite believe him

“You will see, I told him, that this nice idea will remain a dream”.

“Don’t worry, he replied. In this festival, which is there to remember the 150 years of the Milanese Jewish Community, we must do a glamorous gesture, to show our openness to Milan and the world”.

Discussions were held for four weeks regarding the inscription to be carved on the plaque. There will be two dedications: one to the Righteous among the Nations who have rescued the Jews, and another in memory of the Righteous worldwide who make the humanity better.

On Sunday afternoon at 16 I will inaugurate the two inscriptions together with Agopik Manoukian, President emeritus of the Union of Italy’s Armenians, and the Consul General of France Mr. Olivier Brochet.

I cannot believe it yet, because we often find it hard to believe in dreams even when they seem to come true.

The plaque dedicated to the Righteous at the Synagogue of Milan