Memory between suffering and deliverance 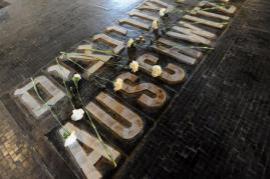 A plaque in the Museum of the Auschwitz-Birkenau death camp

In these days of frantic activism leading up to Holocaust Remembrance Day, two women--both of them Jewish--publicly expressed their unease, landing a moral blow to our proverbial stomachs.
Anna Foa wrote an editorial for Gariwo in which she expressed a deep worry about the higher and higher wall that a part of the Jewish world is erecting as a trench to defend the uniqueness of the extermination of Jews. There is a violent fright of trivialization that leads us to obsessively consider any other historical genocide as incomparable and thus, in the end, of lesser extent. This is a kind of isolation from the rest of the world, closure and retreat into the mourning of the victims that hurts only those who practice it. And it yields a paradoxical result as well: in denying the humanity in our surroundings, we betray once again the very humanity of the victims that had already been violated by the executioners.

Elena Loewenthal entitled her recent book, not by chance published right in these days, as “Io ebrea contro il Giorno della Memoria”, (I, as a Jew, am against Holocaust Remembrance Day) in which she asserts her desire to forget for the extreme suffering sparked by remembrance. An unease that is daily, unnerving, steady, exhausting and in the end becomes obsessive.
If the others, the non-Jews, then do their own bit and reawaken this suffering, in order to do their remembrance duty by gathering it in a specific day in which they rhyme "not to forget, not let it happen again", the outcome is that the Jewish condition is paradoxically penalized, to the point of becoming unbearable.

Elena remind us of our “guilt” as non-Jewish, of the fact that the memory of the Holocaust is the memory of the murder, that concerns its culprits, not its victims. Her furious assertion of a right to oblivion compels us to stop and consider a point of view which we would have never liked to ponder because it reminds us of our collective responsibilities.

The same deep suffering is felt in the words of a third Jewish woman, Liliana Segre’s daughter, who described the ordeal of the survivors’ children in the Corriere della Sera. They cannot even have the pleasure of taking a cake out of the oven. It is forbidden to them because of what the oven reminds of. Hers is a harrowing tale in reply to the disgraceful comparison set by Berlusconi between the persecuted Jews and his own children.

Being myself a woman, I remember another woman, my mother, who visited the Buchenwald camp with me when I was 11 years old. I remember little of what I have seen, as I was still unable to grasp the enormity of that tragedy. Yet I keep a neat and lasting memory, that pierced my identity, of the extreme suffering of my mother, her inability, for many months after that visit, to sleep without being woken up by nightmares. In particular I remember her ever-present horror at the lampshades made from human skin, the skin of the inmates, that were kept in the camp museum. I remember her nausea, her pity, her respect for the people who had undergone such a tragic persecution. It was her suffering to make me feel Jewish – despite the fact that I am not, and I new nothing about Judaism. I have never got this feeling out of my soul, it accompanied me for all my life, and in the end it also led me to be one of the co-founders of Gariwo, and devoting a lot of energy to this organization.

Too much suffering numbs our minds, and diminishes our capability of understanding. We need to reflect on the mechanisms by which human beings exterminate other human beings. We need to reflect to the antidotes to all this, if there are any. To understand if the human kind has some opportunity left in this world. This is why I deal with the Righteous, to remain able to judge clear-sightedly in the hope that not everything is lost.

And on this day of gloomy remembrance I wish young people to meet along the way women like my mother, teachers, friends able to to trasmit a sense of compassion that can turn suffering into its opposite: to fight prejudice, to work for Good, to strive to keep believing in humanity, despite all.

Analysis by Ulianova Radice, co-founder of Gariwo, the forest of the Righteous