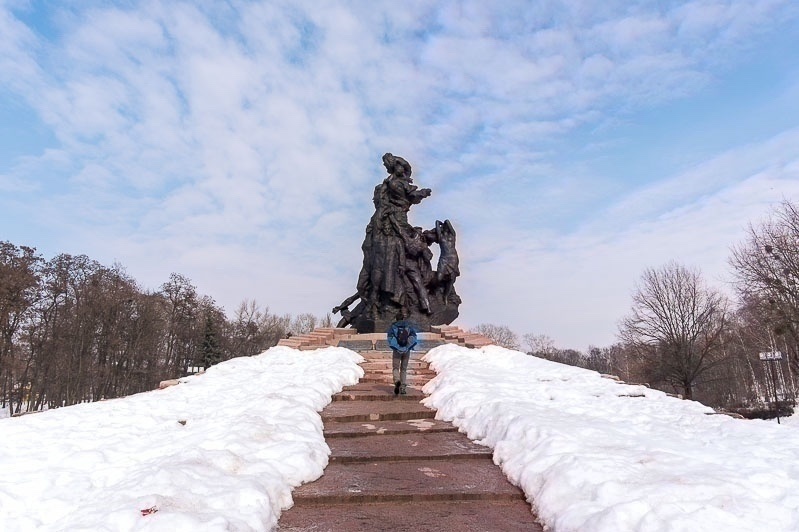 FROM KIEV - Few places in the world have such a density of memories, very painful ones, covering the last century. I imagine that a historian of the future could start from this place, often wrongly considered marginal, to tell the story of Europe, its contradictions and tragedies. I arrive in a Kiev immersed in a lockdown that does not reduce its charm and beauty. But also all its restlessness, past and present, engraved like a brand on the body of its urban fabric.

The means of transport are blocked, museums and public places closed to the public for the virus. Even restaurants are closed, at least in appearance. In fact, it happens that some restaurateurs, with an almost conspiratorial attitude, invite passers-by to enter their locals, officially inaccessible for use, locking them with a waiter standing as a guard at the entrance. But let's go back to the history of Kiev, its traces and wounds. Memories of the Second World War join the many Stalinist buildings and monuments, imposing and gloomy, that dominate the center, flanked - without too much harmony, often - by modern buildings, made in recent years.

There are also many traces of the 2014 revolution and the ongoing war with Russia, which everyone is talking about here, and has experienced a new painful escalation in recent weeks. Not only in the famous Maidan, the heart of the protest, but scattered in many places in the center are also other signs. In fact, one of the most fascinating things to do, in the city closed for the lockdown, is to immerse and discover the many politically themed murals found in Kiev. Imposing murals, sometimes tens of meters high, which, together with others of smaller size, tell themes such as the horror of war, Putin's propaganda on Ukraine, the national pride of its people, as well as celebrating the heroes of Maidan. Beautifully crafted and often promoted by local authorities, they stand out in an explosion of color that compensate the gray and dull colors of the many Soviet buildings, which are the majority.

But tangible traces of the clash between Ukraine and Russia can also be found on the monuments of the Soviets. The most emblematic case is, without a doubt, the crack (a sticker) that was recently added to the Arch of Friendship between Peoples, inaugurated in 1982 to celebrate the bond between Moscow, Kiev and the other nations of the USSR. A crack that reminds us how, not far from here, in the midst of Europe, fighting is still going on. A fracture that is projected not only in the military clashes and in the great games of politics, but also in the lives of many families - as some residents from the East of the country explained to me - divided after the war by the new frontier, but also and perhaps above all by two irreconcilable narratives: sometimes ignored for the sake of a quiet life, other times felt to the point of completely severing all ties with family and friends. I couldn't find a better image to describe the crisis of today's Europe, its unresolved contradictions. Fractures that were thought to be buried with the end of the Second World War, and that re-emerge today in all their ferocity, here as in the Caucasus. Contradictions ignored, with obstinate blindness, even by many in Brussels and in our governments.

Fractures that have repercussions, sadly, even in the world of culture. In a city where everyone, or almost, can speak Russian, a language that is often heard in the streets along with Ukrainian, there are fewer and fewer works translated between these two languages, in one direction and the other; invitations to events and communications between intellectuals from the two countries are also reduced to a minimum, as a writer friend explains to me.

In Kiev, I also visit the monument dedicated to the Holodomor, a genocide carried out by Stalin between 1932 and 1933 with an induced famine that led to the death of four million people in Ukraine, as well as a million and a half far away, in Kazakhstan. A frightening page, often little known, orchestrated to bend, once and for all, the resistance of Ukrainian peasants to the forced collectivization of their lands. A genocide, this, which is struggling to assert itself at the international level, given the reluctance of many governments, afraid of damaging their economic and political relations with Moscow. To remember it, a tower in the shape of a candle (a typical symbolism of the Eastern churches, Orthodox and not only) from which you can access the museum, unfortunately closed, and located on a hill on the banks of the river Dnepr.

No less painful is the site of Babi Yar, located a few minutes away from the center, where one of the largest massacres in the history of the Shoah took place. Here, between 1941 and 1943, the Nazis shot between 70,000 and 100,000 people, including almost the entire Jewish population of Kiev. Ukrainian nationalists, prisoners of war, partisans, communists and Roma also found death here. A symbol of the Soviets' largely reductionist approach to the Jewish catastrophe - a poem by Evtušenko, taken up by Šostakovič in one of his symphonies, began with the words: "There is no monument in Babi Yar" - the site is now under construction as a complex of museums and places of worship of different faiths that will finally do justice to a memory that has been removed for too long. A story told by the writer Anatolij Kuznecov in a very original documentary novel, which bears the name of this site and had to struggle with Soviet censorship.

Children play baseball in the moat that was the scene of Nazi horror, under a bronze monument erected in 1976, which depicts Soviet prisoners and officers, but is silent about the crimes against the Jews. On a sunny day, many families stroll through the large park that hosts it: fathers read to their children the information panels that dot the spaces and streets of the site, including an avenue of the Righteous that honors the memory of those who opposed the Shoah, while a young decorator frescoes the small wooden synagogue nearing completion, accompanied by Jewish music played over the loudspeakers. All in a very different atmosphere - respectful and absorbed, but in its own way lighter - from that of other European memorials; something perhaps inevitable in a country still at war.

So many memories, so many terrible pages have been unfolded in this city, which still in the Thirties had a Jewish population of over two hundred thousand individuals. Among the many specters that wander around Kiev today, there is also the specter of a Europe that is too far away. Far from its memories, which should be at the center of our common conscience; but also far, or at least inept, from putting an end to a painful fracture that has been dividing this country and its people for years - like a new iron curtain. And yet, if Europe - as I believe, despite the cultural and political crisis it faces - still has a soul, an important piece of it can be found right here, in Kiev.