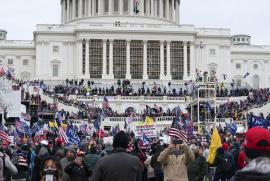 Below we publish Nadav Tamir's analysis on Jerusalem Post about the different facets of anti-Semitism.

During Joe Biden’s presidential confirmation, the entire free world watched in horror and fear at the onslaught of incited crowds on the sanctuaries of American democracy – the Senate and House of Representatives. But for those of us who noticed Israeli flags hoisted alongside the neo-Nazi shirts, the experience was even more shocking.

For anyone for whom Zionism and humanism are important, especially those who remember the trauma of the UN resolution equating Zionism with racism, it is hard to think of a more disturbing connection than the one we witnessed that night.

It was a historic event in many ways which harked back to images of the United States during the Civil War. It highlighted a phenomenon that should have been recognized before – Trump’s presidency tried to transform the US from a leader of the free world into a third-world country. Had he won another term, he would likely have succeeded in doing so, due to his shocking disregard for science on the issues of the corona and climate change, his relentless attack on the media and anyone who thinks differently from him, and finally, his unprecedented incitement against the US democratic process.

Trump and his playbook have become a model for an entire network of nationalists, racists and narcissists, which unfortunately includes not only Orbán in Hungary, Bolsonaro in Brazil and others around the world, but also the Israeli Right. Moreover, the Israeli flag has been appropriated as one of the symbols of the struggle of these authoritarian populists. Most of them hate Jews, just as they hate anyone who is different in skin color, religion or values. But they really like Netanyahu’s Israel, which for them represents anti-Muslim machoism, anti-liberalism and a wonderful symbiosis with their idol, Donald Trump.

Right-wing commentators continue to explain that the Left, which criticizes Israeli policies, is antisemitic – a ridiculous claim for too many reasons to list here. Recently, for example, right-wing media commentators have portrayed those critical that Israel does not take responsibility for vaccinating the population in the Palestinian Authority and Gaza, as a sign of left-wing antisemitism. Particularly ironic is their claim that Israel has no such obligation, even though international law obliges the occupier to take care of the needs of the occupied, due to the transfer of powers to the Palestinians in the Oslo Accords. For self-serving purposes, these commentators appear to suddenly support the Oslo Accords. Moreover, they appear unbothered by the moral and medical consequences of the fact that the Palestinians and Israel remain intertwined, both because of the number of Palestinians working in Israel and because of the number of settlers and our security forces among them.

As someone who opposes BDS and the attempt to blame Israel before examining the facts, I can testify that at times there is no lack of ignorance, naivety and even malice on the radical Left – but antisemitism?! Not only have there always been many Jews on the radical Left, but for many years, the ultra-Orthodox were anti-Zionists and some still retain this view today – does that make them antisemites?

Many contemporary antisemites are actually lovers of Israel. The classical Catholic antisemitism, which accused us of crucifying Jesus, has disappeared due to both theological changes and developments at the Vatican, especially with Pope Francis, who is a sworn lover of Jews. On the contrary, the new antisemitism hates Jews and loves Israel.

ANTISEMITISM IS a racist phenomenon and racism is a phenomenon that is mainly right-wing, just as we see among Trump supporters who believe in white Christian supremacy. These groups are an inspiration to extreme Right organizations, such as “La Familia” and “Flame” in Israel, who believe in Jewish supremacy and a “pure forever” Beitar Jerusalem.People may be wondering why we are losing the support of liberals and progressives, a fast-growing demography in the US. People may be afraid that we are losing the support of the world’s most important and largest Jewish community. People may not understand why many in Europe have difficulty supporting Israel in recent years. The Israeli flag raised in the riots on Capitol Hill should provide the answers.

However, as a student of former president Shimon Peres, I am a hopeless optimist, so I will end with a positive scenario. Despite the horrific events on Capitol Hill, on the very same day we also witnessed some hopeful signs of an opposing trend: Republican Party leaders, including Vice President Mike Pence and former Senate Majority Leader Mitch McConnell, finally distanced themselves from Trump. In Georgia, a Black senator and a Jewish senator were elected for the first time in history and the exciting alliance between them reminded us of the friendship between Rev. Martin Luther King and Rabbi Avraham Yehoshua Heschel. With their election, the Democrats won a majority in both houses of Congress, giving a greater opportunity to clear the rubble and repair the damage left behind by Trump.

It is precisely the awful images from Capitol Hill that we saw last Wednesday which will demonstrate the dangers of populism and racism to many in the US and around the world. As such, we can begin to see the pendulum of the historical dialectic return toward the liberal outlook we saw during the Obama administration’s eight years and in Europe since World War II.

Here too in Israel, there are signs that even the Right is beginning to understand that one must move away from the cult of personality and “Bibi-ism,” which has rendered the Likud, a party whose connection to Jabotinsky and Begin’s liberalism, as entirely coincidental. There is also a new and encouraging trend in our politics of courting Arab candidates among parties that have previously distanced themselves from any contact with the Arab sector.

Perhaps the cliché, “it’s always darkest just before dawn,” will come true and the racist populist camp will lose control of politics, not only in the US but also here – soon in our time.

Nadav Tamir, a former diplomat, is an ambassador to Israel of The Gariwo Organization established by Gabriele Nissim to combat hatred and evil by highlighting the role of people who saved lives and showed personal and public courage. Nadav is the Executive Director of Jstreet Israel.