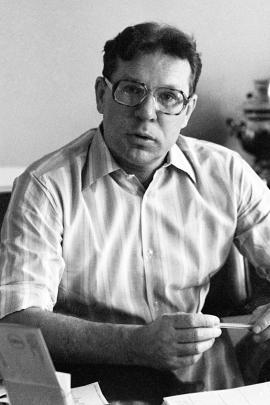 Here are some excerpts from the messages left by Valerij Alekseevič Legasov on the Chernobyl disaster before his tragic passing.

In all my life I never thought that I would, at the age I am now, having just turned 50 years of age, write my memoirs of some part of my life, the one that is tragic, and in many respects confusing and incomprehensible.

But such a scale of events took place, that involved people with conflicting interests and with so many different interpretations of reality. To a certain degree so, it is my duty to tell what I know, what I understand and how I saw the events taking place.

It was April 26, 1986, a Saturday, a beautiful day… Remembering now the journey to the disaster site, I must say that it didn’t even occur to me, at the time, that we were moving towards an event on a planetary scale, that will probably enter the human history forever. Like the famous volcano that decimated the people of Pompeii, or something like that. We still hadn't the faintest idea, we just thought: What's the scale of the work waiting for us? It was clear that the reactor was completely destroyed. By the character of the destruction, for example, I could see that a massive explosion took place. [...] It was evident that quite a lot of activity was going on outside the 4th block. But the first question that worried all of us was whether or not the reactor, or part of it, was still operating. That is, if the process of generating short-lived radioisotopes was still ongoing.

Since I mentioned the reactor, perhaps the moment has come to tell my understanding of the story and the quality of the growth of atomic energy, as I understand it now (It's rare that any of us have, truthfully, honestly and clearly, spoken about this). Regarding the approach to nuclear safety, which also, in my opinion, applies to any technologically complicated or potentially dangerous object, it must be made up of three elements:

The first element: to make the object, for example a nuclear reactor, as maximally safe as possible.
The second element: to make the operation of that object as reliable as possible. Even if it is never possible to reach 100% reliability.
Furthermore, the philosophy of safety absolutely demands the introduction of the third element, the one that admits that, even respecting the first two, an accident still occurs, and that radioactivity or some sort of chemical substance, will escape outside the confines of the object. Precisely because of the possibility of such a scenario, it is necessary an enclosure of the dangerous object: what we call containment.

Well, in Soviet nuclear energy, the third element, from my perspective, has been criminally ignored. At that time, in fact, an international standard had already been formed, demanding exactly three elements of safety. Namely: a reliable reactor, a reliable operation, and a mandatory containment. If there was a philosophy of mandatory containment of all nuclear objects, then of course, the RBMK (class of nuclear reactors built in the Soviet Union which includes Chernobyl), by its geometry and by its construction, simply could not exist. The appearance of this apparatus, from the point of view of international - and really quite normal - standards of safety, would not be allowed.

But apart from that, in the interior of the apparatus, there were also three gross design oversights. The first of these was that, as required by international standards and, generally speaking, by common sense, the number of emergency protection systems must be at least two. What is more, one of them should function independently of the operator. It must automatically shut down the reactor in case of accident. The RBMK reactor was not outfitted with such a secondary protective system independent from the actions of the operator. It was a great error, because if there had been that system, then there would have been no accident at Chernobyl. And, finally, the third design error, which is actually difficult to explain, was that the emergency protection systems were accessible to the station personnel. (Reactor 4 operators had manually disabled some of the safety systems to conduct the test they were doing before the explosion). There were no special codes, nor doubling of the process to disable automatic protections, which are generally used in missile complexes and nuclear weapons. Nothing of that sort was used: something very surprising and peculiar.

Regarding the physics and the technology of the reactors, this is an area that was forbidden to me, both as a result of my own education and the taboo that was imposed by Anatoly Petrovich Alexandrov, head of the Kurchatov Institute, and his subordinates working in this area. [...]

Of course, the mistakes that the operators made are well known and monstrous, and the conduct of the station management is difficult to explain. The punishment of those primarily responsible for this accident is correct. But the main reason were not even the mistakes in the construction of the reactor, which of course also have a place in this and for which the relevant specialists will probably have to answer for. The main reason is the violation of the principle of guaranteeing the safety of such apparatuses, or the placement of dangerous systems in a sort of capsule that limited the possibility of dispersion of nuclear activity beyond the boundary of the apparatus itself.

It is now necessary to consider the possible measures to isolate an accident in the 28 reactor apparatuses that do not have containment. Since it is not technically or economically feasible to construct domes around them, today we have to consider non-traditional dynamic methods of localising possible accidents in such objects. This is mainly a task for the Soviet community. It is our problem.

On the second day on the scene of the disaster - I believe it was - I proposed that we should at once organize an information group, consisting of the governing commission and including 2-3 experienced journalists who would receive, from specialist, information of a technical, medical and radiological character. And they would publish every day, or possibly several times a day, appropriate press releases which could report about how and what was taking place, how the population should conduct itself, what exactly was a rem or roentgen. But it was not their way. The pre-prepared literature which could have been quickly distributed to the population - to explain which doses were safe and which doses were extremely dangerous, how to conduct yourself in an area with enhanced radiation risk, what to measure and how, how to treat fruits and vegetables - was completely absent. [...] There was missing information. What was the level of radiation miners were working? What was happening nearby in Brest Oblast?

What journalists published, in the historical sense, in the archival sense, of course has a colossal significance, as a living documentary material. And it is both necessary and indispensable. But despite this, as a result of the information being released in a somewhat partial manner, a complete daily or weekly account of the situation has not being provided to the country.

Analysis by Valerij Legasov, Soviet inorganic chemist, first deputy director of the Kurchatov Institute of Atomic Energy, then chief of the commission investigating the Chernobyl disaster