Honoring the Righteous for the Armenians

on the anniversary of genocide 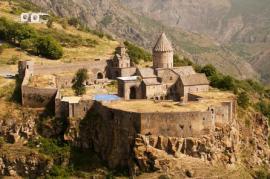 This year we are about commemorating the 99th anniversary of the genocide against the Armenians. The Armenian Genocide was the result of a terrible ideology that took roots in the minds and souls of the Young Turks, to save what was left of the Ottoman Empire, which had been the “Ill Man of Europe” for decades. The West did its part, essentially without intervening to stop the slaughter. It was worn out by the tragedy of First World War. The annihilation of the Armenian population by the Ottoman Empire was the climax of this historical process and the lack of significant and effective responses of the international community to the harmful consequences of oppression and repression against a whole people was doubtlessly an important precedent of the Jewish Holocaust.
The gruesome and systematic extermination of the Armenian populations, besides the aforementioned nationalistic motives, was helped by the ancient and deep roots of the Sharjia in the Muslim world, where it imposes a way of life that trespasses the boundaries of faith, and establishes a set of intangibile and infallible doctrine rules invading the social and political fabric of the nations and, something which we would see in the actual tragic events, subjugating the faithful, imposing constrains to their social and political rights.
Nowadays, unfortunately the Armenians must come to terms, besides the human and material destructions, with a dull negationist attitude, whereby the executioners accuse the Armenians and the lack of response from the external world: the same Anatolic Investigating Committee  of 1919, appointed for the joint pressure of the winners of First World War, was not effective at condemning and punishing the executioners. It was only in May 1915, after the start of the genocide, the Allies expressly condemned the Ottoman authorities for complicity and assistance in the massacres  in the joint declaration Foreign Relations of the United States, introducing the crime against humanity for the first time and directly blaming the Sublime Door for that.
On the contrary the Ottoman government replied by dissimulating the true intent of the massacre, which though in the meanwhile it went on perpetrating in the name of state sovereignty of the defence of its own frontiers against infidel traitors, without having to respond to foreign governments. Those who organized and planned the genocide was worried at the same time to conceal the truth. To make the denial of premeditation possible, the Turks as we said before deported the Armenian population with the pretext of the ongoing war; furthermore to carry out the deportation of these people they recruited some Kurdish tribes, to cover the responsibilities of the governmental officers.
Today a relevant part of the Armenian identity founds its hopes and roots in its own firm conviction that the key factor which will shift the persistent crust of Turkish state negationism will be the remembrance and enhancement of the figures of the Righteous for the Armenians. The figure o fan Ottoman governor who refuses executing the orders to deport the Armenians of his province, the simple Turkish peasant who hides the children of his deported Armenian neighbours, can set the beginning of a path to peace and understanding between the descendants of survivors and the grandchildren of the guilty. The Armenians and the Turks are “condemned” to live together for the next centuries, and the new generations of both sides had better eventually find a way to dialogue, looking into their eyes and starting to simply remember the gestures of those who did not look to  the other side.