On the journalist's interview with Hitler of 1923 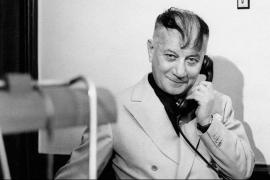 The interview granted by Hitler to Giulio De Benedetti in March 1923 (available here in Italian) is a rarity. The leader of the German Nationalsocialist Workers' Party did almost never grant any interview to German journalists, while he was more willing to grant them to the foreign ones. Such unwillingness had precise tactical and strategic motivations: the image, and above all, words, had to be “tested” only live and, if possible, amidst the big crowds; the fear that the interviewer might not grasp his anonymous greatness was very strong. It is also true that, at the time, Hitler looked, in the eye of the great German newspapers, like one of the many petty extremist bosses that had emerged from the postwar turmoil, one of the angry veterans who were willing to reject the tortuous democratic pathway undertaken by Weimarian Germany to enter the community of Western democracies.

De Benedetti, who at the time worked at the “Gazzetta del Popolo”, managed to interview Hitler. The theme on the agenda was, of course, France and the problem of the Ruhr, which the government of liberal Prime Minister Cuno had decided to tackle by the means of “passive resistance” (all-out strike in the occupied lands). 1923, let's not forget it, is the year of hyperinflation, fuelled by the German government's attempt to try and abate the huge war debt (the “reparations”) in a negative way, i.e. by showing the impossibility to honor it by printing a great deal of waste paper in order to compel the winner countries (France first) to take a milder stance.

De Benedetti approached Hitler with a mixture of curiousity and diffidence toward a character who, as met live, did not at all appear as the kind of myth that many witnesses, charmed by his charisma, were helping create around his figure. The description by the Jewish journalist (“common face”, “uninspiring”, “pudgy building”, trembling “corners of the mouth”, “energetic” handshake) is a symptom of the overall failure to understand his charismatic dimension. Hitler's problem was never about describing a programme able to successfully face the theme on the agenda (debt-driven inflation), but rather to provide a worldview able to “rationally” explain the mystery of the fall (defeat) of Germany. And he, other than the communist party (closed in its rigid Marxist-Leninist dogma) was the only one who could provide it.

Let's look for one moment at the questions that De Benedetti asked Hitler: What is your programme? Don't you fear the risk of a civil war? Don't you think we should talk less and act better? Why resentment toward Socialists and Jews? Is a deal with France ever imaginable?

All the questions aim at describing a small revolutionary party to the Italian audience. De Benedetti, who would no more succeed in approaching Hitler, was unable to provide us with an appropriate picture of what the “genius” of his interlocutor was like. Maybe, we could say, it was too early. We were still on the threshold of the failed coup and imprisonment, two key experiences in Hitler's political growth. Nonetheless, De Benedetti grasped he was in the face not only of a simple “drummer boy” of the German conservative forces, but also something far more difficult to contain: a river in flood, which would brim over the stems. Unfortunately, though, the journalist was not able to navigate in that flow and limited himself to observing, as a vaguely interested spectator, the anonymous petty Austrian boss leading an anonymous party.

Interviewing a charismatic leader is always very difficult, as it does not suffice to ask the right question. You also have to know the scenario adequately, and descend into the “cave”. The De Benedetti case was emblematic: outside a given environment, a given situation, Hitler was nobody. Like him, we would say, many other characters who have crossed the past century (and maybe ours, as well). Not particularly good-looking, not particularly elegant, not particularly eloquent. There were no particular signs that would make Hitler stand out on many other people. And in fact, it was like this. Until a few years earlier, Hitler was an outcast, a poor watercolourist unwilling to serve in the (Austrian) military, very little interested in obtaining a place in the world. And yet... something burned inside him: something that no “positive” journalist” (albeit a prominent one, such as De Benedetti) would be able to describe.

Where words lose any meaning and the human soul trespasses the borders that throw him into the other world of archetypes, fears and hope, where there is the need to abandon the flicker of reason to recur to the blindness of feelings... Well, there it is possible to embrace “the mystical”, passing from facts to values. All things that no logical-philosophical description (to paraphrase the early Wittgenstein) is able to grasp in this world.