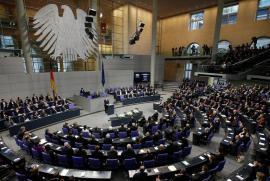 On 2 June the German Parliament, the Bundestag, recognized the Armenian Genocide, and it did so with an overwhelming majority, an abstention and only one vote against. This says a lot about the political support to this initiative, crossing the political spectrum and including both the government and the opposition. And this, despite the remarkable internal opposition, the Turkish pressure and the continuous postponements, that of (too) long have delayed the arrival at the Berlin Parliament of this motion, already expected to be passed in 2015, the year of the Genocide's centenary.

On the basis of this initiative, there was a five-page document written by the deputies of the both parties on the government (Angela Merkel's CDU and the SPD) and the Greens. That is an important text, because it not only defines repeatedly and unequivocally  the events of 1915 as a Völkermord (in German: «Genocide») – a word that also appears in the document's title –but also for the over admission of Germany's role in those massacres. Referring to what stated by German President Gauck last year, the resolution mentions te "complicity of the German Reich" in those events, its "inglorious role". Such responsibility is emphasized also by historians, more and more blatantly over the recent years, and we should acknowledge Germany's merit of admitting it today, although belatedly.

This decision on some respects was painful and not devoid of unpredictable consequences for German politics, but it is the final point of a long ripening process. An important recognition first of all, naturally, for the Armenians of Germany and all over the world, who after the heavy reticence of the past now see resurface a tile of a long forgotten history, re-emerged only recently after decades of deafening silence. It is not a matter, of course, of a victory for the Armenians, but all those who care about justice and historical truth, and are n more willing to yield to the blackmails of Realpolitik to silence the conscience and memory of one of the worst tragedies in the 20th century.

This recognition sparked very strong reactions from the Turkish community in Germany and above all from the government in Ankara, on the brink of an authoritarian drift which is getting sharper and sharper. But it is also true that, in Germany as well as in Turkey, we owe many Turks the recognition of their merit of fighting for a cause which is still very unpopular, often running personal risks. Politicians, intellectuals, writers and artists who today have no more fear of overtly declaring their support to the Armenian cause, often going against their own self-interest and against the opinion prevailing in society.

We will remember here the key actor in the recognition of the Armenian Genocide by the German Parliament, i.e. the young leader of the Greens Cem Özdemir. Son to Turkish parents of Circassian descent - the Circassians were also targeted by a case of genocide, on which a cloak of silence has for too long weighed - Özdemir received in these days continuous death threats because of his commitment to the Armenian cause. Such an engagement led him last year to visit Yerevan, to pay homage  - in the year of the genocide's centenary - to the memory of the victims of 1915. A polyglot politician, very well-informed about foreign policy - a kind of figure we unfortunately lack in Italian politics - Özdemir once again decided to act overtly, whereas for example Angela Merkel, the leader of the ’SPD and vice chancellor Sigmar Gabriel and foreign minister Frank-Walter Steinmeier (who was traveling through Latin America) deemed it better to avoid taking part in the vote at the Bundestag.

This is an important symbolic recognition, that adds up to other recent initiatives headed in the same direction. It may suffice to think of last year's statements of Pope Francis, but also of the recognition of the Armenian genocide by Austria and Luxembourg. Nonetheless, and we shall not forget this, today's Armenia is more and more isolated, and the - nice and right - recognition to its past is not accompanied by any support to that small country that, against bigger and more powerful neighbors, struggles to bring ahead the heritage of a nation, of which it is only a fragment, albeit so important: the one that has survived the Soviet experience. In April, in  the endless war that is dragging on between Azerbaijan and Armenia, the death toll was of three hundred dead in just a few days of fighting

More and more lonely are also the Armenians from Syria, the descendants of survivors to the genocide of 1915, who together with the Muslims and the other minorities of the country are paying personally for what is perhaps the greatest tragedy since World War II. A tragedy, the Syrian war, that a more and more intrusive kind of media bulimia now prevents us from seeing under the correct light, leaving us cold and passive, despite the evidence that now - more than ever - it would be time to act.

While, eventually, we unveil pages of suffering forgotten for over a century, new bloody pages are being written near us and before our eyes. May the light of the past enlighten our present and future: this is our greatest hope.