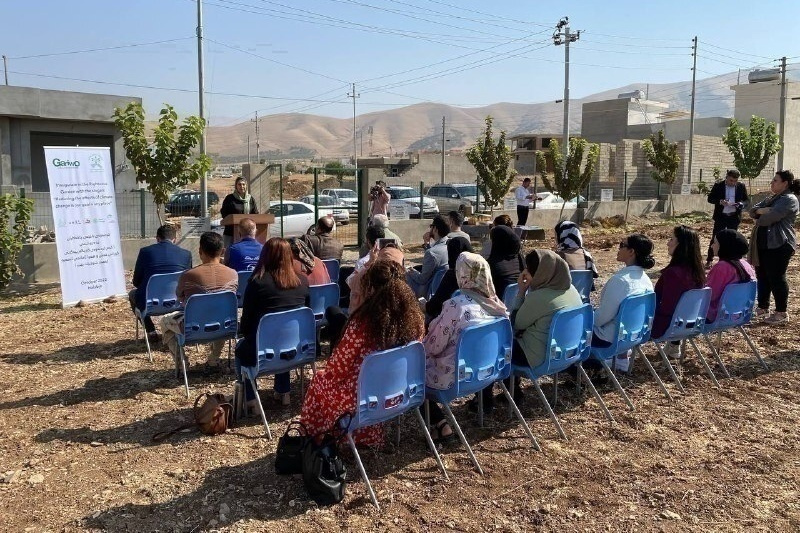 Gariwo inaugurated the first Garden of the Righteous in Iraq, in Halabja. On October 18, 2022, the inauguration ceremony was held together with local institutions, the university and the network of Kurdish-Iraqi associations. The Garden is at the center of Green Halabja, an international project to counter the effects of climate change in the region.
Following the inauguration, the University of Halabja hosted a conference on the relationship between the environment and genocide prevention. Below we publish the speech of the president of Gariwo Gabriele Nissim on this occasion.

First of all, I would like to thank Prof Karwan Ali, Prof Awara Hussein Ahmed, President Qayssar Ahmed, President Alberto Sanna, Halabja Governorate and the Halabja University for this great initiative.
It is very important to spread a message from Halabja to the whole world for the prevention of genocide.

In this place, one of the most brutal crimes against the Kurdish people happened that we should never forget.
Unfortunately, this huge tragedy still goes unspoken in the world today, and public opinion is not aware of what it means to die under the effect of chemical weapons.

This should be recounted in schools around the world along with the genocide of the Jews, Armenians and Rwandans, because it represents one of the most horrific pages of 20th century history. Unfortunately, many prefer not to talk about it, as if it were an affair that did not involve them. This silence represents a dangerous form of negationism.
The Negationism wants to eliminate the traces of a crime, like the Italian jewish writer Primo Levi teaches about the genocide of the Jews. It is not only the desire of the perpetrators, but also of the indifferent people who would like to remove responsibility.

Silence serves many to turn their heads the other way, because it is very convenient not to talk about genocides. It means in fact sending a dangerous and insidious message: that the international community should never be concerned with it, because it is other problems in the world. Instead, we need to explain that, after what happened to the Jews, Kurds and Armenians, there should be a new commandment for all humanity: never commit genocide again anywhere in the world.

This moral imperative should become the fundamental task of international politics. The defense of life and the right to existence for every minority should be the most important moral law to be applied, because every crime against a population impoverishes the richness of human plurality. It is like in an orchestra: if an instrument does not play, all the music would lose its beauty and richness.
That is the reason why when a political crime hits a minority it is always the whole world that loses a piece of its soul. We then must tell the story of how the Kurds were killed, because we must stop chemical weapons from being used again in the future against a defenseless population.

We must urge the international community to ban the production of chemical weapons, because there is always the danger that some new dictator on the face of the earth will emulate Saddam Hussein and want to hit the population with these deadly methods. As Pope Francis observes, as long as chemical weapons factories exist there will always be a danger that they could be used in a new conflict.
This is the great lesson that today the Kurds, who are being intimidated in so many countries in their existence, give to the whole world.

I would like to thank you in the name of Europe and Italy for the building of the Garden of the Righteous. You have remembered not only the moral figures of your country, but the Righteous around the world who fought against the genocides of yesterday and today. Gardens of the Righteous are not just a symbolic place, but the cultural instrument that should serve all humanity to denounce and prevent all genocides.

In your Garden you remembered an amazing man: the Polish Jewish jurist Raphael Lemkin. He was the author of the United Nations Convention for the Prevention and Punishment of Genocide, voted in 1948. Lemkin had a great dream, after witnessing the Armenian and Jewish genocide: an international community who collaborates in the prevention of hate and any form of prevarication that could lead to genocide.
He imagined "an international policeman" who would intervene whenever a crime was being committed against a people or a minority. For him, there had to be an international law that any persecuted person could resort to when he or she was in danger. We, at Gariwo, with the creation of Gardens around the world, have committed ourselves to making this dream a reality. We know it is a long way and, perhaps, it is a journey that will never end. But today I would like to communicate to you my great happiness because today, in Halabja, with your Garden you have placed a new brick of this project.
From your Garden and your University you have sent to the world a message of great hope for the future of humanity.