From indifference to genocide: does history never stop repeating itself? 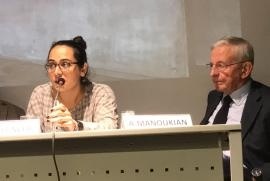 Hevrin Khalaf, an activist who dedicated her life to the struggle for peaceful coexistence between Kurds, Syriac Christians and Arabs, has been killed in cold blood on October 12, maybe by pro-Turkish militiamen on the M4 motorway, between Manbij and Qamishlo, in the areas where Ankara's troops invaded Syria. On 5 October 2019, she had spoken in public for the last time in Ankara, opposing Turkey's intention to occupy Kurdish lands and claiming the role played by Syrian democratic forces in the liberation of North East Syria from terrorist groups. Twelve days later we decided, together with the Department of Culture of Milan Jewish Community, to orginize the meeting "From indifference to genocide: does history never stop repeating itself?" in the significant setting of the Shoah Memorial of Milan. Here we propose the speech of the representative of the Kurdish Community in Milan, Hazal Koyuncuer, at the meeting.

After the meeting between Erdogan and Putin an agreement was reached - which the People's Defence Units did not accept - that provides for the coverage of 122 kilometers of the border, with expansion of 10 kilometers in northern Syria, under the control of Russia and Turkey. The agreement provides that the People's Defence Units, the Women's Defence Units and the inhabitants of northern Syria (using the word Kurdish is in fact incorrect in this case) must therefore, within 150 hours, leave the area completely and let Russia and Turkey have control. Currently, we have opened a humanitarian corridor from the city of Serekaniye - the most attacked, also with chemical weapons, by Turkey and Jihadists - which allows about 200 thousand people to flee to the cities of Kobane, Qamishlo and Hassaké. We were not able to do the same thing in the villages around Serekaniye, which we could not reach because the Turks and Jihadists are still attacking. We also tried to send ambulances, believing that they could not be hit, but they were also bombed. At this moment the bombings and attacks in the villages around Serekaniye - a city that had two hundred thousand inhabitants and that at this time is completely empty, because everyone has been forced to abandon it - are still ongoing. Forty thousand jihadists, coming from 110 countries, have been taken to the north-east of Syria. There are images, which have not been shown in Italy, in which you can see the Turkish flags and the jihadists alongside the Turkish soldiers.

In my opinion, the city of Serekaniye would never have been abandoned if it had not been attacked with chemical weapons by Turkey. The latter, in fact, for days has not been able to advance even a few meters. The only way to do that was by using chemical weapons. It is important, at this point, to understand what is happening in Turkey's internal politics: Erdogan, after all these years of government, has come to the end of his power, and in order to maintain his role he has only one chance: that of creating hatred and nationalism, of triggering a conflict.

When this war began, called the "Peace Operation" by the Turkish government, the operation had the support, with the sole exception of the Democratic Party of Peoples, of all the parties present in the Turkish Parliament - including the Republicans, who were supported by the Kurds during the elections in Istanbul, Ankara and Izmir. The co-presidents of the HDP party, who are in prison, have called on their voters to take sides against fascism and then, automatically, to support the Republicans, who at this time support the war. The latter term cannot be used in Turkey, under pain of arrest.

The fighters of the People's Defence Units and the Women's Defence Units are trying to prepare themselves to face what will happen very shortly, because, as they have declared from the first day and continue to declare, they are not willing to abandon that democracy, that "way of life", more than that land. It is fundamental to underline that the word "Kurdistan" means "land of the Kurds", but the north of Syria is not the land of the Kurds, it is a land inhabited by different ethnic groups. It is the place of democracy that those peoples have managed to build together, called "Democratic Confederalism", which has its fundamental basis in feminism, gender equality, ecology. A very advanced form of democracy, therefore, that we do not live even in Europe, oriented from the bottom up, in which to every ethnic group is given the autonomy to manage their own municipalities. Destroying that democracy, which allowed Syria to live peacefully in the north, would mean destroying all Humanity.

The peoples of northern Syria fought against Assad to declare their autonomy, and later against the Islamic terrorism of the Isis, now they fight against the jihadists and the fascism of the Turkish government. I believe that the whole world has not understood that nothing will allow the People's Defence Units and the Women's Defence Units to surrender. When everyone thought it was over, we started building from below, and we did it when we had the Isis ten kilometers away. Kurdish women have shown the whole world that they don't need men to whom delegate their defence. This can be linked to a quote from Ocalan: "A society can only be free if the woman is free". A free Kurdistan, a free Rojava, can only exist through women and their freedom. In this regard, I think that my companions in northern Syria not only risk to fighting against the Turks and the Jihadists, who are supported by Turkey, but are also faced with the possibility that the Jihadists imprisoned in the camps will soon be free. For years we have been calling on the countries from which they come for recovering their citizens.

I have been to see with my own eyes what was happening and I can say openly that, when the Kurds fought against the Isis, if on the bodies of terrorists, then buried, there were documents, they marked names and surnames, so if one day the relatives had wanted to recover the bodies of their loved ones they could do so. Our humanity is therefore very different from what Westerners still see: we can respect the body of a terrorist who wanted to kill us. In our democracy violence can not be taken into account. This does not mean that Rojava was a paradise, but that there was a region in northern Syria that could be an example to the whole Middle East, even if, maybe, not in that form. Economic and power interests in the Region, instead, destroyed what could have been a great example of humanity and democracy.

We are not able to fight against militarily strong nations such as Turkey or Russia, but we are able to resist every last person, we will never give up, it is essential that everyone knows. Now it is up to you and your conscience. It is up to you to take to the streets and get your governments and institutions to stop Turkey. We have done our duty to Humanity. Now you have the duty to defend that democracy that I have spoken about and to support those comrades, partisans, who are still fighting for freedom. Kurdish women say: Or freedom or death.

Analysis by Hazal Koyuncuer, representative of the Kurdish Community in Milan