​First the dogs, then the Armenians 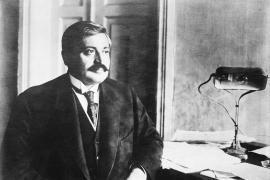 Ten years ago an extraordinary book was publish in France. It deals with the Armenian genocide, and has the great merit to tell in only a hundreds pages, down to the tiniest detail, the key issues of the tragedy that unfolded at the beginning of the century.

Philippe Videlier, in his Nuit Turque (Turkish Night) published by Gallimard in 2005, proved to be a great narrator who has the strength to make us think about the absurd motivations behind the executioners’ behaviour, the dynamics of indifference that repeat in history, the points in common between the persecution of Jews and the one of the Armenians, as well as about those isolated and unheeded individuals, who had the courage not to turn their eyes away and to express their solidarity to the persecuted.

It is a small essay on the banality of Evil and the ways we may have to keep open to Good, and it lets us see the history of the Armenian people from a universal perspective.

Videlier proves to be a true artist of memory, as he urges us to reflect on the human behaviour which tends to repeat itself over history through many different nuances and details.

We can thus discover that in Geneva, in 1896, a pamphlet was published, under the pseudonym of The Old Man of the Mountain, whose author to pander for the European consent to the crimes of Sultan Abdul Hamid compared the Armenian issue to the Jewish one.

He tried to explain that it was legittimate to murder the Armenians for the same reasons why it was normal to be anti-Semitic in Europe in those years.

The Armenians, he argued, were “usurers” like the Jews and it was useless to get overly scandalised, because if a war against the Jews had begun in Europe, too, “no power on earth will prevent their extermination, as just retaliation for the crimes committed in the past hundred years.” Those were the years in which the attacks against captain Dreyfuss, which ignited a major anti-Semitic campaign in France, began.

Videlier tells us that Sultan Abdul Hamid was an flower-loving executioner. Beauty for him was compatible with the first massacres of the Armenians. At a great money expense he had imported the most extraordinary plants from all over Europe for the Yildiz park and he had paid tribute to the German empress by presenting her with a bouquet of roses picked in his glasshouses, made more precious with a gem taken from his jewel caskets.

When the Young Turks seized the power under a name - “Union and Progress Committee” – that promised a better world, the Armenians celebrated this in the gardens of Taksim, as a journalist of the time wrote in his notebook, holding speeches about equality and brotherhood.

Yet they were wrong, because although some revolutionary leaders came from Paris – like the director of Mechveret, Amhed Riza, resident in Rue Monge, in the Latin Quarter – and someone presented himself as “the missionary of liberal ideals”, like dr. Nazim, Medicine graduate, the ideas that were imported from Europe were quite different.

First, the Young Turks thought of how to free themselves from the stray dogs that by wandered around Constantinople by the thousands. A representative of the Pasteur Institute in Paris had proposed an industriale elimination, hidden from people’s eyes, through gas chambers. Instead the new leaders decided to recur to traditional methods. Police recruited some idlers, who, glad about the inexpected reward, in two weeks captured the dogs and took them off to die of hunger and thirst on a lost islet in the Marmaras Sea.

No one shed a tear about that cruel elimination of animals.

Then the Young Turks, drunken by the mad nationalist ideologies that crossed Europe, worked out the Turkish version of the idea of race, soil and blood, the ethnically pure nation. It was Turkey-ism, pure Turkey, cleared from the contaminating elements: Türk Yurdu, Türk Ocaği was their motto. After that absurd “cleansing”, the target were the Armenians who “polluted” the nation.

This was openly declared by Interiors Minister Taalat Pasha, in an address to Mr- Varktes, the Armenian deputy who in the first place had been spared by the roundup of intellectuals of 24 April 1915.

“We will take profit of the favourable situation we are in, and we will scatter your people up to the point that for the next 50 years you will get any notion of reform out of your heads.”

“Will you this carry on with Abdul Hamid’s deeds?” asked Varktes.

“Yes, I will” dismissed the topic quickly Taalat, without any hesitation.