Face to face with genocide 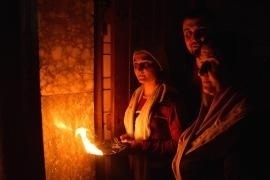 In order to understand what genocide is,we do not need to open history books, visit museums or memorials. It suffices to catch a low cost flight, a few hours away from Rome with stop over in Istanbul or Cairo, and land in Erbil, administrative centre of Iraqi Kurdistan. We Italians do not even need a visa. Nature is gentle and luxuriant, food excellent, people kind and welcoming. To understand how the infamous history of genocide has not at all ended in the middle of the Twentieth Century – nor with the events in Cambodia or Srebrenica – it suffices to meet with the inhabitants of this region, that has undergone several genocide cases over the past 30 years. Coming here, getting in touch with fear, breathing these suspended lives, listening to their tales and trying to the read between the lines when they are reticent.

This is a kind of proximity that catches us off guard and interrogates, digs deep abysses inside us, leaving us disconcerted in the actual presence of this neologism, “genocide”, which was coined to express a new and harrowing idea. That was a word that did not exist in the vocabulary of an language, before a Polish Jewish jurist, Raphael Lemkin, coined it to define the linkage between the plight of the Armenians in 1915 and the one of Jews in the Holocaust, and their deep similarities. Alas, what would Lemkin have thought – I wondered before my departure – if he had been able to look ahead and see the tragedy of the Yazidis, the persecutions of the Kurds under Saddam? Now that the journey has ended, very few doubts remain. Genocide is still here, near us, it is just that we do not want to see it.

And yet everybody, in this region, has born the consequences of this dreadful word, which in Kurdistan takes up a dimension, which is very different from what we have thought. It is not at all abstract, on the contrary it is even familiar to them. Genocide is the daily bread of these people: the Yazidis and the Kurds, but also the Syriacs and the Armenians. Genocide is the air they breath, the land they walk on. It is recurrent in their family dialogues or in their chats before a cup of coffee in quite the same way as we here talk about football or fashion. And yet genocide is in primis a technical and well-defined term, combining the precision of a surgical knife and the unspeakable dimension that you find in the direst experiences of human history. A term of a rare power, even sacred, which makes its propagandistic use carried out by some politicians particularly unbearable and diminishing. Genocide is a word, which, as embodied by the presence of victims and survivors – in front of us – does away with our certainties, presses us, perhaps even assaults us.

There is not only one genocide, but as we said earlier, there are many genocide cases. In Kurdistan, at the time of Saddam Hussein, both the al-Anfal campaign against the Kurds and the chemical attack of Halabja have taken place, besides the massacres and enslaving of the Yazidis in the region of Sinjar in 2014. All events that according to several experts and international institutions can be attributed to the genocidal universe. The death toll amounts to over 100,000 dead, with thousands villages entired destroyed, while the women and children still held captive in inhumane conditions are 3,000, and there are 2 million refugees and displaced people, whose camps surface sometimes amidst the landscape. But not only that: here you find thousands Christians who have fled the persecution of the self-proclaimed Islamic State, who in turn are the grandchildren and great-grandchildren (with a tragic recourse of history) o the survivors to the genocide perpetrated against the Armenians and Syriacs in 1915 in the Ottoman Empire. This all having occurred on a territory, the one of Iraqi Kurdistan, which is far smaller than Northern Italy, and a lot less densely populated than the very territory of Lombardy.

As writes Pier Paolo Portinaro, in a landmark book that has been recently published by Laterza: «Over history, genocide has always been accompanied with substantial indifference. The great mass of genocide has sunk into oblivion, we can say it become to the submersed stratum of universal history». Such a truth, which is simple and yet harrowing, makes no exception today. It is on the contrary precisely what has hit me and pressed me the most, when I started my work with the Yazidi minority, interviewing Nadia Murad, the famous activist and Peace Nobel nominee. Loneliness, frustration, disenchantment, rage – would be a constant of the dozens interviewed I carried out with Yazidi politicians, activists, survivors and ordinary people. The nearly messianic hope in a rescue and a deliverance coming from the West, but also and even more the fear and diffidence that dominate over everything. The difficulty to tell about this tragedy, which is too close, almost always narrated in the plural, in an “us” which at times sounds as epic, but other times appears as a simple device to avoid putting into place our personal memory and self. Not to let the endured violence resurface, with the feeling of powerlessness that arises from it.

It is no easy subject, that is true, not even for the witness that collects these tales. Not even for those, like me, who limit themselves to record and transcribe, while collecting material for my book, the first monographic text written in Italian on this subject matter. It then happens inside of me that I feel that “recognition of our own fragility”, which is mentioned in the Charter of Responsibilities recently promoted by Gariwo. We discover ourselves little and inadequate, in the face of such a major event and the suffering of those victims. These are tragedies, which we can only imagine, I realize, without ever managing to understand them fully. We ask ourselves some questions, and sometimes we feel out of place before too recent a tragedy, and these victims who have not yet had the time to work through grief and violence. But, joint with this – as it also remembered in this important document, that I invite you to read – also the urge of «a challenge to indifference», the need to activate in order to break the walls of oblivion and drawing people’s attention toward this tragedy of our time. This is one of the most dreadful pages, among others, that have marked the history of the Middle East in the past years, and is still ongoing..

Of course, it would be easier to limit ourselves to repeating – as many people do – our “never more” circumstantially expressed on Holocaust Remembrance Day or on any other day set to commemorate our or other people’s past. In the Charter we also read: « Responsibility toward the victims of the past proves inadequate when we fall short of care and mercy toward those who are being humiliated in the present time.» The remembrance of the Holocaust and the Armenian Genocide are too big to be sullied by reticence and half truths, our silence on today’s crimes. The truth is that the world we live in is the proof that Auschwitz has not been overcome, it has become a paradigm of our present. And not only in Iraq or Syria, but also here, among us, in our tacit agreement which makes us accomplices, in our continuous turning a blind eye, looking at our own backyard. The point is that today we cannot afford anymore to delegate to politics and institutions – which are often in a crisis or in confusion – a commitment and solidarity that are more and more emptied of their content.

And hence it is important to remember that Kurdistan is there, near our homes, wherre thousands Kurds have lost their lives fighting against the Isis. That the Yazidis are still knocking at our doors, but no one wants them, and they are being denied the status of refugees besides their dignity as survivors. That Turkey these days is bombing the very lands where the Yazidis were killed by the thousands by the Isis, who caused many victims and awed the survivors. That the Islamic State still holds captive over 3,000 Yazidi women and children, who are enslaved, tortured and against whom all sorts of abuse are committed. Let us never forget it, not even for one instant, as we utter our well-said “nevermore” while thinking about the Jewishor Armenian Holocaust. Or we will run the risk of being parodies of ourselves.