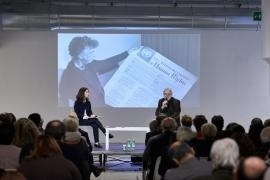 Marcello Flores at Frigoriferi Milanesi during the meeting of GariwoNetwork

Following we publish the transcription of the remarks that Marcello Flores, historian, former Professor at the University of Siena and director of the European Master in Human Rights and Genocide Studies, delivered at the International Meeting of GariwoNetwork, on Europe’s role in the evolution of human rights and the instruments to protect them.

The reflection on what Europe can represent today, in a world which is not only full of contradictions but also of extremely dangerous shadows, should be united with another reflection, maybe more general, on the 70th anniversary of the Universal Declaration of Human Rights, which will recur in a few days. First of all, both this themes, i.e. Europe and the struggle for Human Rights, have always been two painful challenges, often contradictory within themselves. Suffice it to think that one of the countries, at the time of the United Nations Assembly that approved the Declaration, which was less inclined to approve that document was Great Britain.

The great battle in those times was precisely that of the universality of Human Rights, which for the first time not only not only rested on each individuals, but also concerned everyone in any situation they would find themselves in, thus overcoming those Rights of citizens, which had been, since the Eighteenth century, the key to the culture of human rights.

Ever since the Nineties, we have been asking ourselves if the discourse on the universality of Human Rights was a kind of an imposition of Western culture on the rights of all other countries. Nonetheless, we should remember that, precisely within the Committee led by Eleanor Roosevelt that drafted the Universal Declarations, the key figures behind the definition of human rights were a French Jew, a Lebanese and a Chinese, beside Eleanor Roosevelt herself. They were able to propose a series of visions that went beyond the traditional individualism of Western culture ever since Descartes (“cogito ergo sum”), although they did not always succeed in finding an appropriate linguistic form: the Chinese proposed to try and translate some terms of the Confucian tradition, but in the end that could not be done, although the latter was there across all the Declaration.

All this was not exempt from a series of contradictions. The first was the fact that, as a British jurist observed after the proclamation of the Declaration, for about 30 years that document was “put into the fridge”. The Cold War led in facts to forget about those great principles.

But when we manage, all together, to subscribe to some general principles, those remain alive also during particularly tough times, like ours today. So much so that Europe – not in the form of a European Union – two years after the Universal Declaration, took an amazing step forward: the one of the European Convention on Human Rights, achieved by the Council of Europe. This latter represents something different from the European Union, although some of our politicians do not seem to be aware enough of this difference and confuse the Strasbourg Court, which was created precisely by that Convention approved in 1950, with the Court in Luxembourg.

The great novelty in this European initiative has been that of allowing the creation of a European Court of Human Rights, to which every individual could appeal if he or she deemed their fundamental rights had been violated by their State. This is a feature that we should raise the people’s awareness about, because the decisions that the European Court has taken over time, not only regarding Italy – which generally has focused on two big themes: migrants and jails, already exposing two major structural faults in our system – but also regarding other countries, could clearly and usefully explain what happened in Europe.

There have then been a dozen additional protocols to the European Convention of 1950. I would like to mention some, which today are particularly important, to which Italy is bound, having always approved them. Protocol No. 4, Article 4, which concerned the prohibition of collective expulsions of foreigners, Protocol No. 7 of 1984 on the procedural guarantees for the expulsion of foreigners.

The prohibition to discriminate, in Protocol No. 12 of 2000, became fundamental, and today it represents one of the pillars that Italy must follow to make its choices, also at a national level. This is a feature that needs to be more widely popularized.

Let’s not forget, though, that the history of Europe has been extremely contradictory. Precisely in 1950, when on the one hand the European Court of Human Rights was created, there was the ongoing process, that would end only in 1966, of codification of the Universal Declaration of Human Rights into an International Convention on Human Rights. In other words, it became something legally binding for the signatory States, which would not merely feel morally obliged, like toward the Declaration, but also legally.

This process would come to a conclusion with the creation of two different conventions: the one on the Civil and Political Rights and the one on the Economic and Social Rights. In one of the first debates on these Conventions, in 1950, the representatives of France, Great Britain, Belgium and the Netherlands proposed not to hold the Universal Declaration of Human Rights as compulsory in the colonial countries, i.e. those where precisely France, Britain, Belgium and Holland still had the power to subjugate millions of citizens.

This is precisely the ambivalence that we are seeing today and on which we must watch, standing on the right side. In Poland, as we saw in the recent weeks, there are two major movements: one to the defense of the human rights, the Constitution, the independence of the bench and the Constitution from politics, and one of all the European fascist and neo-fascist groups. It is this division, present in Europe today, that must push the civil society to mobilize mostly in a dimension of “what to do”, because it is the pressure on the institution and politics, not the expectation that it may change through the normal rules or the electoral evolution over time, that favors the respect of human rights. I believe never like today there have been so many organizations in civil society that deal with rights. We should find – and I believe Gariwo in this respect can play a key role, precisely for its history and European and international breadth – a way to urge for the identification of some fields, in which the whole civil society, with its organizations, can move around an essential theme, which is one of the cornerstones of the Universal Declaration, and is: dignity. The other major novelty, along with universality, is the reference to dignity as fourth and new element besides freedom, equality and brotherhood. And dignity is what is thwarted when we are faced with violations, that are such even when governments fail to acknowledge this, and on the contrary, somehow they boast about their will to hit people who they think do not deserve protection, in that they question the priority status they assign to the nation. I believe, for example, that a protest of all the associations against the appointment as President of the Commission of Human Rights of the Italian Parliament of a senator who openly, on different occasions, uttered racist slurs against the Roma and other peoples, should be necessary, because we cannot tolerate that people keep on talking about human rights under such a presidency.

Thus, on the one hand it is important to spread the knowledge of and raise the awareness about the principles and proposals that the European Convention on Human Rights allows us to deal with now, the battles it enables, and urge governments to allocate resources – because often, the constraints and limits of the European Court depend on the lack of such resources. On the other hand, it is above all important to undertake pro-European campaigns starting from civil society, not to be left waiting for a political mobilization. I believe that only that sort of mobilization can yield results because it is in culture, education and the raising of a better awareness that it is possible to move. And from this point of view, I cannot do anything but become a spokesman to Gariwo’s and Gabriele Nissim’s proposals, adding the one of moving ahead toward a better connection with the other associations that deal with rights, to the defence of a common battle.