Denying, minimizing the magnitude of and justifying genocide

how genocide denial works in our societies 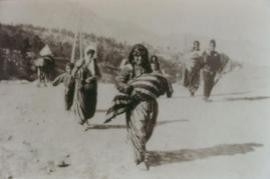 A picture of Armenian genocide

There is not just one kind of genocide denial, as there is not just one type of genocide. By this term, “genocide denial” or “negationism”, we in fact describe all attitudes aimed at declaring every genocide as null or never happened, or at attributing the victims, when it is impossible to deny the crime, to diseases, war, and ethnic clashes. So for instance many people love depicting the last major genocide of the Twentieth century, the one occurred in Rwanda in 1994, as a tribal clash. Others claim to be objective, but actually they retrace the motives behind genocide in recent history. In the case of Rwanda, in the clash between ethnic groups and the cumbersome heritage of colonial oppression, as if the latter were not always cumbersom or the existence of many ethnic groups were not a common feature over all Africa. In this case, though, placing things into context means denying and minimizing the magnitude of genocide. The reference to the ethnic context is aimed at justifying genocide.

The seemingly objective explanation is aimed at disavowing the existence of an actual genocide case in the extermination of nearly one million Tutsies by the Hutu militias in just about three months. Although it is not overtly admitted, at least as far as the Europeans who foster this negationism are concerned, in their hindsight there is the idea that in the end it is all about Africans, and in Africa such things happen every day. Another broadly spread negationist discourse is that of the Turks about the Armenian Genocide.

Here the blame is put on the violence of war. Here, too, justification is sided with a background discourse: the Armenians were rich, they were merchants. Killing a rich merchant, slaughtering his sons and grandsons, seems to be less serious than killing a poor peasant. The Kurdish militians who swooped down from the mountains to attack the caravans of women and children, raping and killing them, were justified by their backwardness and their misery. The same discourse goes for the Tutsies, more civilized, more “accultured”, closer to the Europeans than the Hutus. Did not they go for it, like the Armenian merchants and, to say it all, like the Jews? In the end, such a discourse is put forward also about the khmer rouges, who murdered one to two million Cambodians. The victims were above all the urban dwellers, who were literate, and in some cases even wore glasses. What a provocation, in a situation Che provocazione, in a situation in which the majority of peasants were illiterate! And in the cultural revolution, for whom did we take side? For the Red Guards, of course, who for us represented the oppressed of history, who seeked deliverance from misery.

We did not know, or we did not care about, that we should never recognize anybody’s right to exterminate others, not even when somebody is oppressed or we think they are. And that we should also never slip from explanation down to justification, above all when the explanation is not very defining, if it is limited to focusing on hatred and resentment between classes, ethnic or social groups. But carrying out genocide demands more than hatred and resentment. It demands a plan, an organization, masterminds other than petty executioners. And even though all executioners were among the oppressed, as it is not, certainly the masterminds behind mass murder are not.


Of course, the Holocaust is the model, other than of all genocide cases, also of all kinds of negationism because it is a broader, more thoroughly organized genocide than the others, and because we have not worked out its memory and healed its wounds, yet. Also, because it was carried out in old Europe. Because it was recounted by more writers and proven by more evidence. Because it had scientifically authoritarive masterminds, like those who conceived the racial theories or the doctors who took part in it, other than a cultural or mental background which accepted it. It suffices to reflect on the breadth of the consensus to Nazism. And then, again, because it was about the Holocaust that we witnessed from the very beginning, when the gas chambers were still working, to the rise of negationism, we identified it and gave it a name. And what happened before? And afterwards?


Before the Holocaust there was a genocide case who is not very well known, yet, even though it raised some echoes and discussions, up to the point that the German Parliament has recognize it: the genocide against the Herero carried out by the German colonial government. People did not even waste time denying it, or anyway it was said that was only a crackdown, maybe with an excess in the use of force, but fairly “normal” in essence. And then there was the Armenian genocide. The world took note of it, although Hitler said: “Who remembers  the extermination of the Armenians now?”. Nonetheless, Jewish novelist Franz Werfel published precisely in 1933, when Nazism rose on power, his book about the 40 days of the Mussa Dagh about the Armenian genocide. And later, in the Nazi ghettoes, many Jews, above all the youngest, like those who would give rise to the Warsaw Ghetto Insurgency, read that novel like a prelude to what they were about to undergo. And it was precisely about the Armenian Genocide that negationism first emerged, even though it did not bear this name, yet. In fact. for the Turks the extermination of the Armenians has never existed, and it was just a matter of violence caused by war and the crackdown on the Armenian revolts.

Still nowadays, a hundred year later, this is the official justification by the TurkishÈ government; even though Erdogan has recently brought his condolences to the Armenians, although without mentioning for what. Another common feature to all kinds of genocide denial is that they rise while the genocide is still ongoing; they are the first feature of genocide. In this the Nazis have been true masters. One day the world would be ready, they thought, to consider the extermination of Jews as a great epic accomplishment, but that moment had not arrived, yet; hence the secret, for how it is possible to consider like a secret a crime committed on such a wide scale and with the involvement of so many executioners and accomplices. The secret is the first step of negationism, its purpose is to allow the guilty to say that all we are talking about has never existed. No matter if there are thousands pieces of testimony and evidence. Differently from the genocide denial about the Armenians or thr Tutsies, which does not deny the death toll but justifies it as a part and parcel of war or ethnic clashes, Holocaust negationism denies the data, the facts, the gas chambers first of all, and the value of documentation. The effect is the same but the pathway is still different.


And another different kind of negationism is that about the gulag, the extermination by hunger of the Ukrainan peasants, the death toll of the Cultural Revolution or of Pol Pot’s regime. Where the public opinion does not exist, or is seriously constrained, negationists do not even need to deny crimes. It suffices to shut up and make sure that nobody speaks too much. Hence the difficulties met by the Memorial Movement, the more important and committed movement born in Gorbatchev’s Russia to recognize the victims of Stalinism and protect human rights, under Putin’s rule. This movement is nowadays subject to many attacks, in a country where the life of journalists is not guaranteed, as many cases have taught us starting from the one of Anna Politkoskaja.


Negationism, in fact, and this is a very scant consolation for us citizens of democratic Europe where it has been blooming, is targetly mainly to us, to indoctrinate us citizens of democratic countries, so that we forget about the past genocide cases and fail to prevent the ones of the future. In the countries where it is still difficult to raise one’s voce, there is not even the need to wage a propaganda campaign for spreading lies, because silence and fear will suffice.

Analysis by Anna Foa, historian and professor at the University "La Sapienza" of Rome