COVID-19, the "Spanish Flu", and the Righteous 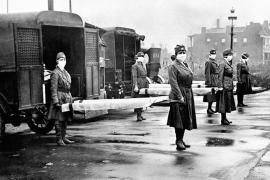 Just over a century ago, as World War I was beginning to wind down, an influenza pandemic infected an estimated 500 million people worldwide—about one-third of the planet's population at the time. The disease probably killed somewhere between 20 million and 50 million victims. There are profound differences between that event and the current COVID-19 pandemic. These include fundamental differences between both the diseases themselves, and the technologies available to fight them. However, the people facing COVID-19 today have many of the same basic human tendencies, both good and bad, as did their ancestors. Thus, the human response of a century ago may provide some useful insights as we face the current situation.

The virus that spread across the world in 1918 quickly became known as the "Spanish flu", and that name has persisted ever since. People often assume this is because it originated in Spain, and then spread to the rest of the world. Such an assumption could be contorted into a series of false and ugly assertions. For example, it could lead to blaming the nation of Spain, or the Spanish people, for this influenza and all of its resulting deaths. Such an argument, however, would be totally illogical even if the disease had originated in Spain. After all, the geographic point of origin implies nothing about any attempt to harm others, much less complicity of a particular people or nation in that attempt. The absurdity of the argument is highlighted by the fact that the so-called "Spanish flu" did not originate in Spain. The only reason it is known as the "Spanish flu" is that it was first reported in the Spanish press. This is because Spain’s journalism was not under heavy government censorship. Unlike the countries where this influenza may have originated, Spain was neutral in the World War raging at the time.

I describe how "Spanish flu" is a misnomer because, like a century ago, some people here in the United States are associating the COVID-19 virus with a particular nation or category of people. These categories refer to where the virus is thought to have originated, or where there are currently many cases. This labeling has probably led some people to the ridiculous conclusion that they will escape the virus by avoiding restaurants that serve Chinese or Italian food while continuing to dine out at other restaurants. Of course, not only is this particular association counterproductive to defeating COVID-19, making any association between adverse events and a category of people can potentially contribute to more severe forms of discrimination.

On the other hand, much of the American media is devoting large amounts of time to accusing any political opponent of being a racist if they have ever referred to COVID-19 as the "Chinese coronavirus." That time could be better spent briefly pointing out that there is no basis for blaming anyone for the disease and then providing accurate information on how to avoid contracting the disease and surviving it if infected. At this crucial time, treating the COVID-19 as just another story to politicize can be just as harmful as using it to promote racism.

Fortunately, the influenza pandemic of a century ago also provides us with a more positive perspective on our species as we face the current crisis. Some years ago, I was fortunate to have the opportunity to study the spread of the so-called "Spanish flu" through what is now the Canadian Province of Newfoundland and Labrador.1 The disease would often make everyone in a family bed-ridden and incapable of caring for the other members of their family or going out to obtain food and medicine. In such situations, the survival of everyone in the family depended on someone from outside the family, bringing them food and medicine. In one area where a large number of people became infected, I had the privilege of interviewing a man who had lived through that time.

The gentleman was in his nineties, but his memory was clear. As soon as influenza entered the area, many entire families became ill and isolated from their widely dispersed neighbors by heavy snow. At the time, the man's father had the largest dog sled team in the area. Being the postman, he needed the large dog team to deliver mail through the deep snow.

Given that his own family showed no signs of having contracted influenza, the postman could have chosen to remain home to escape the disease. Instead, the gentleman told me how he clearly remembered helping to load food and medicine onto his father's sled. Then his father set out, but this time instead of delivering mail, he carefully brought life to the families stricken with the disease. Many more people probably lived than would have if the man had stayed in the safety of his own home.

As the people of Italy courageously battle the current pandemic and the people in the United States begin to do likewise, the goals of Gariwo may seem far removed from the crisis and better suited to more ordinary times. However, Gariwo's mission may be particularly relevant to this moment in history. This is because humans continue to be a species that places other humans into categories (e.g., Italian, Chinese, Spanish, American, Liberal, Conservative) and then decide which of these categories to regard as villainous enemies, and which to treat as family. The enemies are then blamed for misfortunes, while those seen as members of one's own family are loved and valued.

Gariwo exists to inform the world about the Righteous. This is important because the mere existence of the Righteous (i.e., individuals who risk their lives to help individuals often classified as "others") demonstrates that all people have the potential to expand the sphere of those they love and care about. During times of crisis, this expansion can mean helping others in your community as if they are members of your family. For example, young people with higher resistance to the virus can carefully bring food and medicine to their more vulnerable elderly neighbors. It can also mean fighting both the temptation to blame innocent people for causing the illness, as well as the urge to falsely accuse other innocent individuals of racism. These are some of the messages Gariwo can send to the world as it fights COVID-19.