an example for today’s athletes 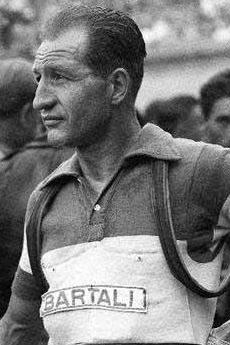 Gino Bartali, champion and Righteous among the nations

The tale of Gino Bartali has just become popular in Italy and worldwide as Yad Vashem bestowed on him the title of Righteous among the nations. Therefore he is not only famous for his great success at the Tours of Italy and France, but also for his commitment to rescue the Jews – setting an example that deserves some ethical considerations regarding the world of sport and a reassessment of our country’s past. First of all Bartali teaches todays’ athletes that the ones among them who have achieved great records and have been celebrated in the media and on the streets bear a great responsibility towards the rest of the world . A certain kind of behaviour can sow very good seeds. Let’s remember for instance the extraordinary figure of middle-distance racer Emil Zatopek who not only supported the Prague Spring, but then paid a high price for opposing the Soviet “normalization” brought about by tanks, and was thus dismissed from all his charges and forced to work in a mine of uranium.
Celebrity imposes some moral duties. But this is not the only point. Bartali shows us the difference between someone who takes on a moral duty out of a desire to appear and those who instead do so out of a sense of responsibility. The winner of many Tours of Italy hid in his bycicle dozens forged documents, which made it easier to flee to many Jews and antifascista, but the he did not think to show off his deeds in post-war Italy. He never told about this to the press, as for him the really important thing was only to have exploited his celebrity to rescue some Jews. Who would have ever dared rummage the champion’s bycicle? Bartali knew very well that his popularity was an extraordinary tool to do things that others would never have done. Also, he felt fulfilled for helping the Jews, and this was enough for him.   Today instead some famous football players seem to think that gestures of civil commitment are also means to increase their own popularity. Let’s think of Kevin Boateng, former player of the Milan football team, who threw the ball up in the public gallery and went out of the field to protest the racist screams against him. He was right to do his gesture, but then he went to many shows and even to the United Nations and presented himself as the moral herald of anti-racism. It was as if he said: “How good I am. I threw a ball away and I am a hero of Good”. Or let’s think of Mario Balotelli, another player of Milan, who is ofteen booed in stadiums for the color of his skin, but reacts as if he had clearance to do whatever he wants. In front of the annoying invectives against him he then felt entitled to insult referees and opposing teams.
The Bartali case can be read in just one more way.   Should we honour heroism or value the possible good of human beings? Many have written that Bartali risked his life to rescue the Jews, in reference with Yad Vashem’s motivations. The Jewish institutions underlines the fact that the title of Righteous should be bestowed on those who have imperiled their lives for the rescue of another human being. In Italy things were not like this. Differently from what happened in Nazi-occupied Poland, here it was possible to rescue some Jews by running limited risks. You wouldn’t have to sacrifice yourself to carry out a deed of moral courage. Bartali did, and his most important legacy is that every man can often do little things that can save the world even in the direst situations. For him it was enough to use hia bycicle’s crossbar.