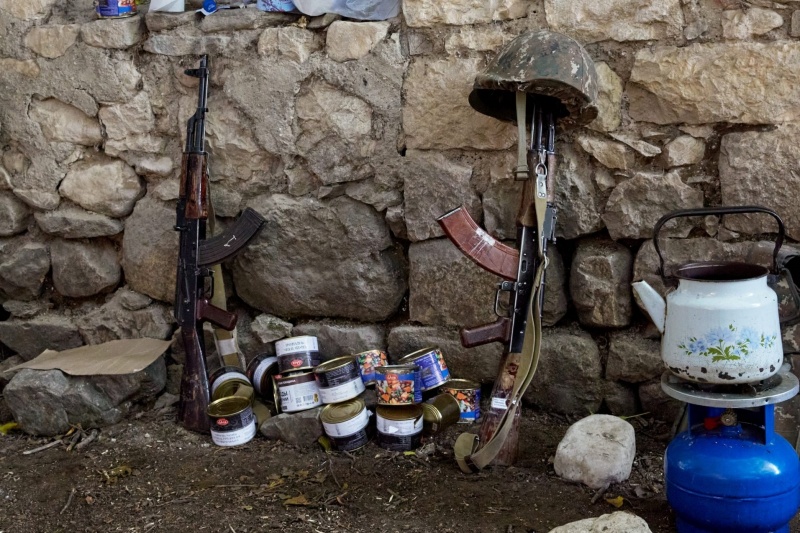 When the BBC asked philosopher and mathematician Bertrand Russell what was his message for future generations, the Nobel laureate answered two things, simply and profoundly. The first, to look only at the facts and the truth they bear, without thinking about what we wish to believe and the consequences. The second: "love is wise, hatred is foolish", not only on an individual, but also on a social level. I always thought that these two thoughts were linked, and that love does not exist where there are silences and censures.

These are not abstract ideas of mine, but matured when I had in front of me for weeks dozens of victims, whom I met and interviewed: eyes that remained engraved in my conscience as a fire brand. These are reflections that I developed in Karabakh and Armenia, where I was between December and February, but also by discussing with Armenian friends every single day since that cursed September 27.

I would start precisely from the words of a friend, one of the best known journalists in Yerevan: the biggest problem of Armenia today is its ethnonationalism. An ethnonationalism in exponential growth, in the last few months, but which has also produced in the past the removal of the perspective of the other, of his sufferings. I am certainly not talking about the dictator Aliyev, who has no suffering at all, and no other perspective than to increase his capital and his despotic power. I am talking about the hundreds of thousands of Azerbaijani refugees who fled from Karabakh and the seven districts. I am talking about the crimes committed in Khojaly; I am talking about Aghdam being razed to the ground, stone by stone, so that these Azerbaijani refugees could never return to their homes. I am talking about the young Azeris who died in battle, even in the last war, and the civilians killed by the absurd and useless Armenian reprisal against Ganja and other cities.

Because, at a closer look, Armenia did not lose the war (it won the one in the 90s), but the peace. It lost with politics and diplomacy, first of all, not with weapons; and it lost also because the removal of the sufferings of the others, of the Azerbaijani civilians driven out of Karabakh, made it blind to the possibilities of finding a fair compromise, for decades, aiming at their return. Sure, it was about righting the historical wrong by which the Soviets had assigned Karabakh, with its Armenian majority, to Azerbaijan. But the reality, even then, was more composite: to say that this land has always been exclusively Armenian is to do an injustice.

Yet, the cure that some Armenians – fortunately still a minority – propose to solve today's problems is: more nationalism. But more nationalism, in today's toxic context, means only one thing: fascism. And in fact, there are many neofascist groups, in Italy and in half of Europe, who are waiting for nothing else: to tell Armenians that they are a superior people, for history, ethnicity and religion, to sow in them more hatred, victimism, conspiratorial and xenophobic ideas and, ultimately, to exploit a conflict that they have never dealt with for decades for their own political gain.

Emblematic is the case of Germany, where I live, when openly aligned against Erdogan and Aliyev, in the midst of war, there were three opposition parties: Greens, Linke and AfD. Two parties capable of governing in different federal states, the former two, and with much more influence and political weight – especially the first – than the new right-wing AfD, which is still marginalized and out of a government perspective. In the midst of the bombings in Shushi, we had representatives among the most radical of this party making a macabre commercial to themselves from the bombed and wounded cathedral. This is not only a moral issue, but also a matter of Realpolitik: whoever made such an invitation did not have the slightest idea of the political reality of Germany today, of how this invitation – covered by the German media – was a little diplomatic suicide.

Emblematic is also a slogan, conceived moreover for a very good cause, an Armenian governmental solidarity fund: "We are our borders". The first time I read it I thought for a moment that it was a slip of the tongue, a mistake. It wasn't. But how can you win or prosper if you are unable to go beyond your limits and boundaries? It seems a suitable slogan, if anything, for the oligarchs who have speculated and destroyed today's Armenia, through monopolies that exploited the borders unjustly closed by Baku and Ankara, disseminating a toxic and vulgar culture (compared to that of normal Armenian citizens), along with abuses and robberies. Fortunately, not only the history of Armenia, but also the present of the Armenian diaspora in the world, tells us a very different and composite panorama: that of women and men who, for centuries, starting from a strong attachment to their roots and culture, have crossed many borders, both mental and physical, making a decisive contribution not only to Armenian culture, but also to that of the world.

And no, personally I have not been surprised or impressed by the flattery of so many small groups who today, mistakenly, hope to find in Armenia the good old Chile, the good old Spain. They are wrong, I believe, because in the many demonstrations I have seen in Yerevan, for or against the government, there have been no deaths, and Armenian democracy – without the support of anyone except the Armenians themselves – Is still there, far from its end. What surprised me, at the contrary, was to see the solidarity of so many Yazidis, who in the thousands of Armenians fleeing Karabakh have relived their sufferings; I liked to see the solidarity with the Armenians of several Jewish communities – from Italy, to Russia, to the U.S. – despite the supply of terrible weapons from Israel to Baku; I liked, finally, the solidarity of many ordinary citizens who, in Italy and elsewhere, have compensated at least in small part the scandalous silence (complicit, certainly not neutral) of our governments.

I believe and hope that we have to start from here. But also from a dialogue with the other: certainly not with Aliyev or Erdogan, who represent bloody regimes, but with those figures – from Akram Aylisli to Arzu Geybullayeva, from Günel Movlüd to others – who, while not denying the sufferings of their own people, do not deny or belittle those of the Armenians. I repeat: winning one war, two or a hundred, is not enough, if you are not able to win peace. And peace is won with other weapons: those of international diplomacy and reconciliation. Which are the exact opposite of any falling back or nationalism.

I write these words a few kilometers from the Franco-German border, long marked by wars and horrors, by a hatred that seemed inescapable, and today pacified and open. Who would have imagined it, only a few decades ago? Many Germans and French, today, still wonder about it. And I write thinking about Armenia, this eternal phoenix, which has passed through continuous occupations and tragedies in its history, but which has always found – In the strength of its ideas and culture, in its openness – the strength to be reborn.