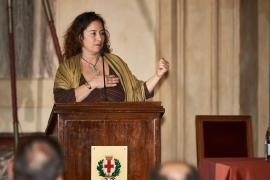 Pinar Selek in the Alessi Room

Good afternoon to you, my dears! It is a nice meeting. A creative one. A wink to all resisting women and men, who are small seeds in this burning world. The seeds of the future Forests of the Righteous. We are gathered here to create these Forests. To escape the ruling discourse, the truths that are imposed on us. To help write a different history, i.e. the one of resisting women and men. The kind of history that turns resistance into creation.

The word resistance has two meanings. Quite often, when you resist repression, you find yourself in a self-defensive position. I have reflected on this issue especially after the major torture I underwent. I have resisted. I did not give them what they wanted. They did not manage to have me submitted but they have been able to do what they wanted to my body. If we spend our lives with this kind of self-defensive resistance, it is too wearing. We resist, resist, defend ourselves against everything. And the agenda is always set by the rulers.

This is why I am not going to tell you about what I underwent or we are submitted to. This kind of information can be found over the Internet. I will try to sum up my experience of collective creation, within a space that has been sullied, a fabric that has been torn by nationalism, militarism and destroyed by systematic violence.

As far as I am concerned, I am a little point on a big picture. This picture, with all its contrasts, inhabits different worlds and contradictory dynamics. Within this framework there are repression, nationalism, sexism, homophobia as well as resistance and rebellion. And that is not just a sheer matter of detail. Fortunately.

The example of Turkey makes it possible to us to ask one of the world’s key topical questions. Up to which point can extreme violence limit the creation of politics? When this violence annihilates even the very faculty of thought, is it then possible to escape this cycle of violence? Is it possible to escape a kind of reactionary resistance, broaden our vision, question ourselves and succeed in building a positive politics of creation? How can we create ourselves despite the many relations based on articulated forms of domination?

This is difficult, and yet possible. As far as I am concerned, I have witnessed to it, I have lived it. I am talking about a country where the construction of the nation relies on the genocide against the Armenians, the Nation-State is based on the ethnical-confessional conception, on a land emptied and ravaged by genocide and the many massacres. I am talking about a country where, following this giant operation of homogenization even the birds’ voice has endured the humiliation of a piercing mythological-religious language. I am talking about a people, which lives in a country of nameless cemeteries. With a wounded and militarized population that has long been submitted by a systematic nationalist formatting.

Until the Eighties, even within the progressive circles, no one mentioned the Armenians or the Kurds, no one talked about history. This is why people did not see the current reality accurately. But after nearly 20 years, something miraculous happened. This reminds of Hannah Arendt’s phrase underlining that “the human being itself manifestly possesses the gift of doing miracles. Such a gift, we call it in our current language as action. It is to action that he turns in particular to start a process, to start a chain by himself». In this we see how, despite the murderous crackdown, the new emerging movements emerge and act, around causes that were unseen before, such as the feminist or LGBT movement, the Kurdish or Armenian movements, the ecologist social and anti-militarist movements. The new cycle of protest, revolving around the new approaches of freedom, was born in the Nineties through the circulation of hitherto unseen causes. The anti-authoritarian fight is the spirit at the origin of this cycle that sets into motion a major change in the forms of collective action. The emergence of a new vocabulary, new worldviews and organizations is articulated with the convergences of protest movements through the need of experiencing solidarity against the repression. Permanent alliances give rise to the learning of common struggles, the spreading of concepts, the journey of ideas, the untold experiences. The participation of the new generation to which I belong is realized following the convergence, the crossing of pathways and the successive innovations of the space of social struggles.

The small point that I am finds itself on the channels offered by these small ants. I am one of the thousands ants-cicadas that work and sing in the shade. Despite the strong inner and external tensions and the state violence exerted by the different conservative governments, these ants-cicadas who bring flutes and pencils have operated a miracle for nearly 20 years. Their creation relies on self-reflection, self-transformation and detachment from hegemonies. Independence entails plurality and fluidity that, in their turn, allow the invention of new action methods by deconstructing the existing political vocabulary.

Could such fluidity resist war, the new crackdown measures, the rampant authoritarianism of an Islamic-Conservative regime that puts in place a politics of re-islamization and economic deregulation of economy, law and society? Can this transformation give half a hope to a country that has been wedged for a few years into a tunnel of horror? Paradoxically, in that tunnel, it is always possible to continue the road. Maybe, like acrobatic ants, without being noticed and by creating some unforeseen expressions in the face of the multiple tentacles of the domination system. With this expression of freedom, political action gains its meaning. It is engaging to perform a miracle.

I am happy to be among these ants-cicadas.