we are all French, Lebanese, Syrians 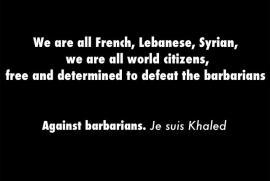 What can we do in the first place?

After hearing about the events unfolding in Paris, I wondered how we can launch an unequivocal message about our will to defend the fundamental values of Humanity against the savagery of the ISIS.

And I immediately thought of Khaled al Asaad, the keeper of the Syrian archaeological site of Palmyra, who was slaughtered by the very butchers who sew terror in the heart of Europe, in the capital that best epitomizes the universal values launched by the revolution: liberté, égalité, fraternité!

We Milanese people have a unique opportunity: on Wednesday 18 November on Monte Stella hill we will plant a tree to remember Palmyra's martyr in the Garden of the Righteous Worldwide of Milan.

Let us throng Monte Stella hill, let us "invade" the Mound to participate in this ceremony in which our Mayor, together with great archaeologist Paolo Matthiae, a great friend of his Syrian colleague's, will unveil the stone with this inscription: To Khaled al Asaad, slaughtered by the ISIS for defending in Palmyra the archaological heritage, civil memory of the Humanity, while the world stood still.

Like in Milan, all over  Europe, in all Gardens of the Righteous, we shall embrace each other in the name of the exemplary figures who have been able to defend human dignity and remember Khaled al Asaad, symbol of the moral resistance against fundamentalism, in solidarity with the victims, of Paris as well as from Beyrouth, Aleppo, Kobane, Jesuralem and every single place where terror strikes. Like Milan, which witnessed the assault against a young Jew in the recent days.

We are all Khaled, we are all French, we are all world citizens, free and determined to defeat the barbarians!